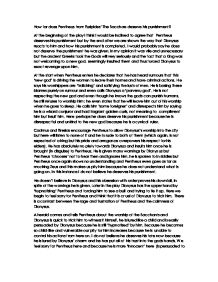 How far does Pentheus from Euripides' The Bacchae deserve his punishment?

How far does Pentheus from Euripides' The Bacchae deserve his punishment? At the beginning of the play I think I would be inclined to agree that Pentheus deserves his punishment but by the end after we are shown the way that Dionysus reacts to him and how his punishment is completed, I would probably say he does not deserve the punishment he was given. In my opinion it was vile and unnecessary but the ancient Greeks took the Gods will very seriously and the fact that a King was not welcoming to a new god, seemingly insulted them and thus forced Dionysus to exact revenge upon him. At the start when Pentheus enters he declares that he has heard rumours that this 'new god' is driving the women to leave their homes and have criminal actions. He says his worshippers are 'frolicking' and satisfying the lusts of men. ...read more.

to Pentheus. He is given many warnings by Dionysus but Pentheus 'chooses' not to hear then and ignores him, he is spoken to in riddles but Pentheus once again shows no understanding and Pentheus even goes as far as mocking Zeus and this makes us pity him because he does not understand what is going on. In this instance I do not believe he deserves his punishment. He doesn't believe in Dionysus and his obsession with order proves his downfall, in spite of the warnings he is given. Later in the play Dionysus has the upper hand by 'hypnotising' Pentheus and forcing him to see a bull and trying to tie it up. Here we begin to feel sorry for Pentheus and think that it is cruel of Dionysus to trick him. There is a contrast between the rage and frustration of Pentheus and the calmness of Dionysus. ...read more.

Because it is his mother that is going to kill him, I believe he does not deserve to be killed like this, but by his mother killing him it forces us to take more pity on Pentheus and Agave and I do not believe he deserves his punishment like this. It just proves the malice of Dionysus and how far he will go to induce punishment on the city of Thebes in order to be worshipped. So Pentheus deserves his punishment because he was unwilling to accept a new 'god' and refused to worship someone he did not believe in and this resulted in his death but he did not deserve the way in which he was punished because it was his mother who was forced to do it and he was brutally ripped apart while in a child-like state of mind and under Dionysus' control. So we feel sympathy towards him and I do not believe he deserved his punishment ...read more.