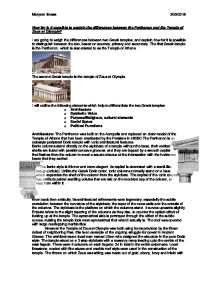 How far is it possible to explain the differences between the Parthenon and the Temple of Zeus at Olympia?

How far is it possible to explain the differences between the Parthenon and the Temple of Zeus at Olympia? I am going to weigh the differences between two Greek temples, and explain how far it is possible to distinguish between the two, based on sources, primary and secondary. The first Greek temple is the Parthenon, which is also related to as the Temple of Athena. The second Greek temple is the temple of Zeus at Olympia. I will outline the following elements which help to differentiate the two Greek temples: o Architecture o Symbolic Value o Purpose/Religious, cultural elements o Social Space o Political Functions Architecture: The Parthenon was built on the Acropolis and replaced an older model of the Temple of Athena that had been eradicated by the Persians in 480BC.The Parthenon is an octostyle peripteral Doric temple with Ionic architectural features. Doric columns stand directly on the stylobate of a temple without the base, their vertical shafts are fluted with parallel concave grooves, and they are topped by a smooth capital that flashes from the column to meet a square abacus at the intersection with the horizontal beam that they carried. The Ionic style is thinner and more elegant. Its capital is decorated with a scroll-like design (volute). Unlike the Greek Doric order, Ionic columns normally stand on a base which separates the shaft of the column from the stylobate. ...read more.

Through secondary sources I found out that the most characteristic feature in the architecture and decoration of the Parthenon is the 'Ionic frieze running around the exterior walls of the cella. Carved in bas-relief, it most likely depicts an idealized version of the Panathenaic procession from the Dipylon Gate in the Kerameikos to the Acropolis.' The sculpture on the east end embellishes the mythical chariot race, overseen by the god itself, between Pelops, whom the Greeks called the founder of the Olympic Games, and Oenomaos, a king of Pisa. Above both porches, the metopes display scenes from the Twelve Labors of Heracles, whose strength made him an important figure for the athletes. Purpose/Religious cultural elements: Although both the Greek temples main purpose would've been seen as a place of worship, there are also other things linked to their purpose and religious significance. There is no evidence as such that I have found which shows that the Temple of Zeus at Olympia was anything more than a temple and was made only to house the Statue of Zeus. And also the Olympic Games were considered to be part of religious rituals that revolved around the King of gods, Zeus. 'So it was only fitting that a grand temple and an even grander cult representation were constructed for the many Greeks who made pilgrimages there in order to worship their father god'. ...read more.