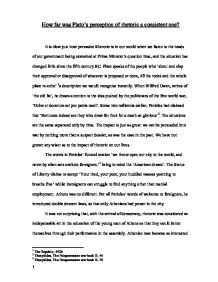 How far was Plato's perception of rhetoric a consistent one?

How far was Plato's perception of rhetoric a consistent one? It is clear just how pervasive Rhetoric is in our world when we listen to the heads of our government being examined at Prime Minister's question time, and the situation has changed little since the fifth century BC. Plato speaks of the people who 'shout and clap their approval or disapproval of whatever is proposed or done, till the rocks and the whole place re-echo' 1a description we would recognise instantly. When Wilfred Owen, writes of 'the old lie', he draws attention to the idea pushed by the politicians of the first world war, 'Dulce et decorum est pro patria mori'. Some two millennia earlier, Pericles had claimed that 'Fortunate indeed are they who draw for their lot a death so glorious'2. The situations are the same separated only by time. The impact is just as great: we can be persuaded into war by nothing more than a suspect dossier, as was the case in the past. We have not grown any wiser as to the impact of rhetoric on our lives. The words in Pericles' funeral oration 'we throw open our city to the world, and never by alien acts exclude foreigners.'3 bring to mind the 'American dream'. The Statue of Liberty claims to accept 'Your tired, your poor, your huddled masses yearning to breathe free' whilst immigrants can struggle to find anything other than menial employment. Athens was no different. For all Pericles' words of welcome to foreigners, he introduced double descent laws, so that only Athenians had power in the city. ...read more.

Therefore, Plato argues in favour of moral truth, even if it does not match with factual truth. To this end, 'fiction' can be 'truth'. When Plato presents his creation story, which is intended to explain the hierarchy in his Utopia, he compares the parts of society with metals; gold, silver, and base metal. He asks 'Do you know any way of making them (the people) believe it?'18. The creation myth is clearly not factually true, but 'even so, it should serve to increase their loyalty to the state and to each other.'19 As far as the republic, which Plato hopes to build, is concerned, the end justifies the means. Plato aims to create a society which is perfectly balanced and just. As 'Justice can be characteristic of an individual or a community'20, we can see that Plato aims to create the microcosm of a perfect society in each person. With this end in mind, it seems that he can set about the task by whichever means he likes, so long as it will achieve the end. By telling the creation myth, it is his intention to promote the tripartite theory of society, which will, in turn, promote the ideal balance and justice. For justice to be maintained among the people, the Philosopher kings must hold absolute power. Justice is only possible when each class of the society stays in its own place and does that which is its duty. The Philosopher Kings are the rational element, and, according to Plato, the golden part of society. ...read more.

Aristotle states that 'the science that studies the supreme good for man is politics'30 and yet 'politics is not an exact science'31. This is clearly antithetical to Plato's form of the good, and in book I, vi, Aristotle says that 'things are called good in as many senses as they are said to exist... clearly, then, there cannot be a singe universal common to all these cases, because it would be predicated not in all the categories, but in one only'32. This appears to confirm my initial response to Plato's theory of forms, which does not seem to stand up to scrutiny in the real world, as apart from the evidence given in 'The Republic' 508e, and the images of the sun, and apart from this, which is on no way substantive enough, there is no evidence for the existence of the form of the good. Gorgias argues that the rhetoric can be used 'like any competitive skill... when morally appropriate'33. Plato, however maintains that this would lead the general public to believe that 'he is an expert on morality when he isn't and think he's a moral person when he isn't'34. This is odd, as in the Republic, he appears to support the argument made by Gorgias, yet, in the Gorgias, he presents rhetoric as wholly dangerous, and the rhetoricians as dangerous weapons out of control. The Utopia which Plato has created is presented to us largely in terms of metaphors and similes. Some of these are sufficiently outrageous, such as his creation story, that he even apologises. However, Plato, with the subtlety of a true rhetorician, seems to make his similes so close to reality as to make us accept the truth of what he is saying. ...read more.