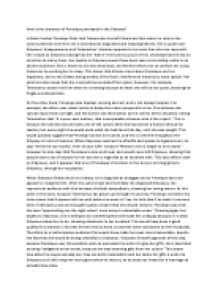 How is the character of Penelope portrayed in the Odyssey?

﻿How is the character of Penelope portrayed in the Odyssey? In Book 4 when Penelope finds that Telemachus has left Ithaca and that when he returns the suitors planned to kill him she is described as anguished and weeping bitterly. She is upset over Odysseus? disappearance and Telemachus? situation appears to be more than she can cope with. She is loyal to Odysseus saying that she ?hates? the Suitors pursuit of her, showing that she has no intention to marry them. Her loyalty to Odysseus would have been seen as incredibly noble to an ancient audience. She is shown to be very emotional, and Athene often tries to comfort her using dreams or by sending her to sleep. This shows that Athene cares about Penelope and her happiness, and to the Greeks being worthy of the God?s interference meant you were special. ...read more.

no longer to be trusted.? However he also says that Penelope is wise and loyal, and would never kill Odysseus, showing that people have a lot of respect for her and she is regarded as an excellent wife. This also reflects well on Odysseus, and it appears that one of Penelope?s functions in the story is to bring glory to Odysseus, through her reputation. When Odysseus finally returns to Ithaca, he is disguised as a beggar and so Penelope does not appear to recognise him. After the suitors beat and humiliate the disguised Odysseus, she requests an audience with him because she feels sympathetic, showing her caring nature. At this point in the story, because Telemachus has grown up through his journey, Penelope considers the instructions that Odysseus left her with before he went to Troy. He told that if he hadn?t returned when Telemachus was old enough to grow a beard that she should remarry. ...read more.

In order to decide which suitor would be best for her to marry, Penelope sets up a test. She creates a contest of archery, where the suitors had to shoot through 12 axes without hitting any of them. It was one of Odysseus? skills, and Penelope knows this. At this point Penelope is supposedly still unaware that Odysseus is in the palace, although she has been told multiple times by many people that he may be on his way, however the setting up of this test appears to show otherwise, as she knows no-one is capable of completing the task but Odysseus. Odysseus encourages this contest, knowing that this is his chance to reveal his true identity and claim his glory. Through her wit and cunning Penelope makes this triumph possible, and so the reader is left to doubt whether she is aware of Odysseus or not. ...read more.