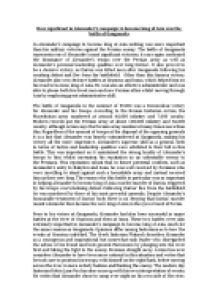 ﻿How significant in Alexander?s campaign to become king of Asia was the battle of Gaugamela In Alexander?s campaign to become king of Asia nothing was more important than his military victories against the Persian enemy. The battle of Gaugamela represents one of Alexander?s most significant victories; it once again confirmed the dominance of Alexander?s troops over the Persian army as well as Alexander?s personal leadership qualities over king Darius?. It also proved to be a decisive victory, as Darius was killed soon after Gaugamela following his crushing defeat and flee from the battlefield. Other than this famous victory, Alexander also won decisive battles at Granicus and Issus, which helped him on his road to become king of Asia. He was also an effective administrator and was able to please both his Greek men and new Persian allies whilst moving through Asia by employing great administrative skill. The battle of Gaugamela in the summer of 331BC was a tremendous victory for Alexander and his troops. According to the Roman historian Arrian, the Macedonian army numbered at around 40,000 infantry and 7,000 cavalry. ...read more.

Arrian however considers Alexander to have been more rational in this situation and writes that he took care to position his troops, with himself on the right flank, before moving across the river in more orderly fashion and flanking the enemy. The modern day historian Robin Lane Fox has also come up with his own interpretation of events. He writes that Alexander chose to camp over night on his own side of the river, before making a surprise attach upon the Persian camp before dawn. Regardless of the method used by Alexander to gain his decisive victory at Granicus we still can learn a lot about why this battle would have been useful in aiding his campaign to become king of Asia. If it was a courageous yet rash Alexander that won victory as described by Plutarch then we learn about his brilliant leadership and great relationship with his own troops, who were willing to take the immense risk in charging across a river at the heart of their enemy. If it was the more calculated Alexander that won victory as Arrian and Lane Fox believe then we can see Alexander?s amazing tactical mind on display. ...read more.

This change in dress would have greatly pleased Persians who saw Alexander accepting their local traditions, however Alexander was careful to keep his own troops on side and so wore a combination of both culture?s dress. The importance of Alexander?s administration should not be underestimated. Had Alexander have been a more despotic and ruthless conqueror then it is probable that he would have been forced to face up to constant rebellion at the hands of disgruntled Persians. Because Alexander was able to keep Persians happy, he was able to continue his campaign unhindered and also meant he was well received by a large number of potentially hostile cities. Alexander?s combination of immense military prowess and administrative skills meant his campaign to become king of Asia went as smoothly as could be imagined. This said, it was his overwhelming defeat of Darius at Gaugamela that was most significant in him achieving his goal. Had Alexander not been successful at Gaugamela then Darius would never have been murdered and Alexander would not have become king of Asia so comfortably. Because Alexander was able to defeat Darius so convincingly he was quickly accepted as king by much of Persia and so his continued advance through Asia became all the more confortable. ...read more.