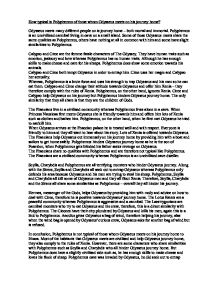 How typical is Polyphemus of those whom Odysseus meets on his journey home?

How typical is Polyphemus of those whom Odysseus meets on his journey home? Odysseus meets many different people on is journey home - both mortal and immortal. Polyphemus is an uncivilised cannibal living in cave on a small island. Some of those Odysseus meets share the same qualities as Polyphemus, others have nothing at all in common with him and some have slight similarities to Polyphemus. Calypso and Circe are the femme fatale characters of The Odyssey. They have human traits such as emotion, jealousy and love whereas Polyphemus has no human traits. Although he has enough skills to make cheese and care for his sheeps. Polyphemus does show some emotion towards his animals. Calypso and Circe both tempt Odysseus in order to entrap him. ...read more.

When Odysseus arrives at the Phaecian palace he is treated well and with respect. Everyone is friendly to him and they all want to hear about his story. Lots of Xenia is offered towards Odysseus. The Phaecians help Odysseus out immensely on his journey home by providing him with a boat and sailors to get home safely. Polyphemus hinders Odysseus journey home as he is the son of Poseidon, when Polyphemus gets blinded his father seeks revenge on Odysseus. The Phaecians share no qualities with Polyphemus and are therefore not typical like Polyphemus. The Phaecians are a civilised community whereas Polyphemus is an uncivilised cave dweller. Scylla, Charybdis and Polyphemus are all terrifying monsters who hinder Odysseus journey. Along with the Sirens, Scylla and Charybdis all seek out to entrap Odysseus whereas Polyphemus only defends his area because Odysseus and his men are trying to steal his sheep. ...read more.