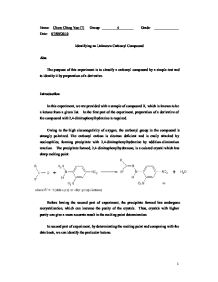 Name: Chow Ching Yue (7) Group: 4 Grade: Date: 07/09/2010 Identifying an Unknown Carbonyl Compound Aim The purpose of this experiment is to classify a carbonyl compound by a simple test and to identity it by preparation of a derivative. Introduction In this experiment, we are provided with a sample of compound X, which is known to be a ketone from a given list. In the first part of the experiment, preparation of a derivative of the compound with 2,4-dinitrophenylhydrazine is required. Owing to the high eleconegativity of oxygen, the carbonyl group in the compound is strongly polarized. The carbonyl carbon is electron deficient and is easily attacked by nucleophiles, forming precipitate with 2,4-dinitrophenylhydrazine by addition-elimination reaction. The precipitate formed, 2,4-dinitrophenylhydrazone, is a colored crystal which has sharp melting point: Before having the second part of experiment, the precipitate formed has undergone recrystalisation, which can increase the purity of the crystals. Thus, crystals with higher purity can give a more accurate result in the melting point determination. In second part of experiment, by determinating the melting point and comparing with the data book, we can identify the particular ketone. In this experiment, the variables are: Controlled variables Independent variable Dependent variable * Kind of derivative * Data book source * Amount of derivative used in melting * Identity of carbonyl compound * Melting point of the derivative Hazard Warning ...read more.

When comparing the result table and the data table, we can match the melting point of 2,4-dinitrophenylhydrazone with the data table. At 127-128?, the unknown ketone is probably propanone. 2. When the unknown ketone X was added into 2,4-dinitrophenylhydrazine solution, orange precipitate formed, which is 2,4-dinitrophenylhydrazone. Chemical Equation: Conclusion The unknown carbonyl compound X is propanone, with its 2.4-dinitrophenylhrazone melting point 128?. Questions and Answers Q1. What factors decide the choice of solvent in the recrystallisation procedure? [ANS] At first, the solvent used must not react with the solid formed in the experiment. The solid should be soluble in the solvent at high temperature, but insoluble at room temperature. If the solid is soluble in solvent at room temperature, no solid can be formed in the stage of recystallisation, which is not a appropriate solvent. Also, impurities should be insoluble to solvent thus theses can be removed before the recystallisation. Q2. How were soluble impurities removed from the derivative? [ANS] After the formation of the derivative, suction filtration was carried out. The derivative was soaked and washed by 3cm3 of methanol when the bump was switched off. Soluble impurities dissolve in methanol, which was removed after resuming the suction to remove methanol. Q3. In the recrystallisation procedure, why were the crystals dissolved on only minimum amount of ethanol? [ANS] If excessive ethanol is used, the solution formed is not saturated. ...read more.

Red precipitate formed By using either Tollen test or Fehling' test, we can distinguish whether the unknown carbonyl is an aldehudye or ketone. 2. Mixed melting point determination. Apart from the identification of combonyl compound by finding out the melting point of the purified sample of 2,4-dinitrophenylhydrazonde and comparing the melging point with the data book, but also using mixed melting point determination. Such determination does not require the use of data book, but a various of knowm derivative of carbonyl compound. Every pure substance has its fixed melting point. The presence of small amount of inmpuritiier lowers the melting group. Mixed melting point determination is used of identify a compound by adding small amount of a known compound with the sample for test. If the two substances are identical the melting point should be the same as that of either sample. If the two substances are not identical, then the melting point will be depressed. 3. Further about addition-elimination In the experiment, the unknown ketone and 2,4 dinitrophenylhydrazine undergoes addition-elimination reactions. Addition-elimination reaction is reactions between aldehydes or ketones and derivatives of ammonia. The products of the reaction are alkanal or alkanone hydrazone. As water is give out in the reaction, this type of reaction can be regard as condensation also. Take reaction between carbonyl compounds and 2,4 dinitrophenylhydrazine as an example: Reference 1. AUS-e-TUTE http://www.ausetute.com.au/index.html 2. Melting Point Tips And Guidelines http://www.csi.edu/ip/physci/faculty/rex/mptips.htm 3. Wikipedia http://en.wikipedia.org/wiki/Main_Page ?? ?? ?? ?? 1 ...read more.