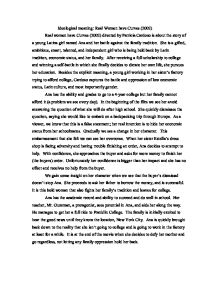 Ideological meaning: Real Women have Curves (2002) Real women have Curves (2002) directed by Patricia Cardoso is about the story of a young Latina girl named Ana and her battle against the family tradition. She is a gifted, ambitious, smart, talented, and independent girl who is being held back by Latin tradition, economic status, and her family. After receiving a full scholarship to college and winning a self-battle in which she finally decides to dictate her own life, she pursues her education. Besides the explicit meaning, a young girl working in her sister's factory trying to afford college, Cardoso captures the battle and oppression of low economic status, Latin culture, and most importantly gender. ...read more.

order. Unfortunately her confidence is bigger than her impact and she has no effect and receives no help from the buyer. We gain some insight on her character when we see that the buyer's dismissal doesn't stop Ana. She proceeds to ask her father to borrow the money, and is successful. It is this bold woman that also fights her family's tradition and leaves for college. Ana has the academic record and ability to succeed and do well in school. Her teacher, Mr. Guzzman, a protagonist, sees potential in Ana, and aids her along the way. He manages to get her a full ride to Franklin College. ...read more.

Or even more directly some of the statements she makes to her new boyfriend, questions like, "don't you want a skinny girl?" Ana reaches a turning point in the movie and persuades the whole factory to work in their underwear do to the miserable heat. It is this scene, which I believe embodies the true ideological meaning of this film. She is overcoming, or shedding free (meant symbolically) the traditions, low expectations or anything else that has with held her. She is proud to be who she is and isn't afraid who sees, a true feminist. Although this film is applied to women its message can be generalized. Tradition isn't what has to be, full potential can be reached it just takes coming in to yourself and recognizing your inner beauty. ...read more.