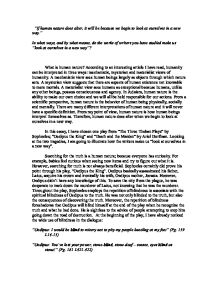 This emphasizes the idea of humans are often blind to themselves, the others and also the truth behind things. When they seek to search for the truth, the outcome can be catastrophic: "Messenger: He rips off her brooches, the long gold pins holding her robes - ......he digs them down the sockets of his eyes," (Pg.237 L1402-1405) "Messenger: And there we saw the woman hanging by the neck, ......spinning, swinging back and forth." (Pg. 237 L1395-1397) In the exodus of the play, the ending is a disaster, Jocasta hanged herself and Oedipus blinded himself. Truth can be harmful sometimes, therefore it is better to stay the same and be ignorant. At least we could be better off and happier because truth sometimes doesn't give us any satisfaction at all. This made us to have a whole new perception about the exploration of truth. After studying the play, I would be more objective about my actions and be humble to the others' advice, to prevent anything destructive happening. But on the other hand, Oedipus is a man of great quality, he had the courage to seek for the truth even though people persuaded him not to because the truth was dangerous. If we are satisfy about the current state and choose to be "blind" to many truths on the world, there would be no improvement and development at all. There is certainly no an ultimate answer to the question whether or not we should seek for the truth. ...read more.

Perhaps Miranda is guilty, the truth is so thrilling that even me as an audience wanted to know it so badly. In the end, nobody knows if justice has been achieved by Paulina's outrageous actions. The play also exemplify the idea of too much truth may be dangerous. On the way of searching the truth, Paulina didn't realize that she is destroying many things, their relationships, and Gerardo's trust to her etc. Gerardo had already warned her not to continue her pursuit of truth: "Gerardo: People can die from an excessive dose of the truth, you know." (Pg. 36) Gerardo could foresee the disastrous outcome of the whole event and tried to stop Paulina continue to look for the truth. It is because Gerardo sensed that too much truth won't do good to all of them. The idea of too much truth is dangerous in "Death and the Maiden" links back to the idea of the catastrophic consequences of obtaining the truth from "Oedipus the King". Paulina and Oedipus are very similar, they strife for the truth which they don't know is destructive. Paulina destroyed the relationship between Gerardo and herself; whereas Oedipus devastated his kingdom, his family and most significantly, he blinded himself. Both tragedies raised our caution to the pursuit of truth, acknowledge us that truth is double-edged, it can favour but also destroy someone. Human can't be too ignorant and also can't know too much truth. "It is better to settle for half." as Alfieri puts it in the play "A View from the Bridge". ?? ?? ?? ?? ...read more.