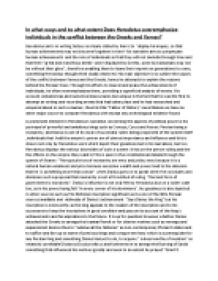 In what ways and to what extent Does Herodotus overemphasize individuals in the conflict between the Greeks and Xerxes?

Transfer-Encoding: chunked ﻿In what ways and to what extent Does Herodotus overemphasize individuals in the conflict between the Greeks and Xerxes? Herodotus aim?s in writing history as clearly stated by him is to 'display his inquiry, so that human achievements may not become forgotten in time? his narrative aims to perpetuate human achievements and the role of individuals so that they will not dwindle through time and that their ?great and marvelous deeds- some displayed by Greeks, some by barbarians may not be without their glory?, therefore enabling them to leave their imprint on generations to come, something Herodotus thought their dually deserved. His main objective is to outline the causes of the conflict between Xerxes and the Greeks, hence he attempts to explain the reasons behind the Persian Wars. Through his efforts to marvel and praise the achievements of individuals, he often overemphasizes them, providing a superficial analysis of events. His account contains bias and numerical inaccuracies but unique in the fact that he was the first to attempt at writing and recording events that had taken place and he had researched and enquired about in such a manner, thus his title ?Father of History? nevertheless we have no other major source to compare Herodotus with except any archeological evidence found. ...read more.

?Now is the time for action while you are young; for the body grows in strength, so does the mind but as the years pass and the body weakens, the mind ages too and loses its?edge?.This is apparent as a downside in the system of monarchy as Democedes had instructed Atossa to say just so ?what I want you to do is to invade Greece? and thus influenced him in his decisions ?no sooner said than done?, this somehow justifies Herodotus reasons for focusing on individuals rather than deep rooted causes of events because perhaps individuals were enough cause. The monumental act of rebellion that is the Ioanian Revolt is a clear cut example on how Herodotus disregards and prefers to analyze the personal ambitions of Histaeus and Aristagoras rather than investigate the actual causes such as the loss of autonomy. Histaeus, tyrant of Miletus hoped to become the ruler of Naxos and Aristagoras wishing to gain further power even if it meant him to disgrace himself and desperately seek help from powerful states such as Athens and Sparta. At Athens Aristagoras is seen ?anxious? in asking for Athenian aid as he has previously ?been turned down out of Sparta by Cleomenes? overrules any description about the Hellenic feeling of the city states wanting to revolt against the tyrant leaders. ...read more.

Salamis was the battle that destroyed the Persian fleet of Xerxes to the point it eliminated the possibility of a future naval advance all because of Themistocles, despite the fact that Herodotus presents his as supposedly receiving advice from Mnesiphilus on how to act. Themistocles cunning strategies and him thinking ahead left Persians unwilling to encounter Athens again at sea, and Herodotus hardly gives him any credit for it. Herodotus also focuses on a supernatural element which also took a toll on Xerxes and his decisions was ? not after all? ? be a good thing? he is depicted as a man ?terrified? of his own dream and the meaning of it ?been haunted by a dream which which will not allow me to act as you have advised?. This however could be a superficial unrealistic reason Herodotus covers in his narratives instead of again underlining the main possible cause for invasion. But one cannot blame Herodotus for just so and furthermore his inability to understand military tactics but focuses on stories he himself find fascinating, his work is vital in our modern understanding even if causes are overemphasized through individual ambition or not mentioned at all. ...read more.