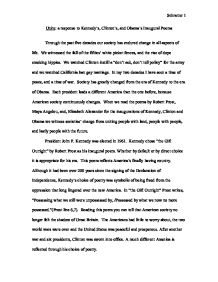 Unite: a response to Kennedy's, Clinton's, and Obama's Inaugural Poems Through the past five decades our society has endured change in all aspects of life. We witnessed the fall of the fifties' white picket fences, and the rise of dope smoking hippies. We watched Clinton instill a "don't ask, don't tell policy" for the army and we watched California ban gay marriage. In my two decades I have seen a time of peace, and a time of war. Society has greatly changed from the era of Kennedy to the era of Obama. Each president leads a different America than the one before, because American society continuously changes. When we read the poems by Robert Frost, Maya Angelou, and, Elizabeth Alexander for the inaugurations of Kennedy, Clinton and Obama we witness societies' change from uniting people with land, people with people, and lastly people with the future. ...read more.

Clinton chose Maya Angelou's, "On The Pulse of Morning" a very different poem than Robert Frost's. This poem shows a society that isn't as carefree as the society Kennedy's inauguration. Angelou writes"...today, the Rock cries out to us, clearly, forcefully, /Come, you may stand upon my Back" (Angelous line 10, 11, 12) Americans have become one with their land. Rather than fighting to keep it, as expressed in Frost's poem Angelou's poem shows the new fight Americans have taken on she writes about, "armed struggles for profit" (Angelou line 32). She continues and explains that although we have lived these "wars" they do not need to be lived again. We can see that society has aged and acquired experience and is not quite as new, reflecting on past wars and pleas for peace, however the main challenge is the uniting the people. ...read more.

The new American culture positively recognizes the progress of those prior as opposed to Maya Angelou's poem which was less uplifting, "History, despite its wrenching pain/Cannot be unlived, but if faced/With courage, need not be lived again" (Angelou line 35, 36). The biggest change is that now we are a society that is preparing for the future. We watched America unite with land, unite with people and now America unite with our future. It is a gradual change that is reflected in the three poems. Elizabeth Alexander's poem reflects our culture moving towards a change and hope that anything truly is possible. "In today's sharp sparkle, this winter air, anything can be made, any sentence begun." It is a very different poem than the previous two. Touching on all different walks of life from farmer, teacher to mechanic showing that we are all at a starting point, a new beginning. A beginning which American society will be "walking forward in that light" (Alexander line 47). That light is our future. Schratter 1 ...read more.