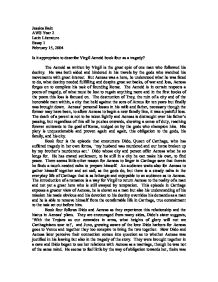 Is it appropriate to describe Virgil Aeneid book four as a tragedy?

Jessica Bain AWS Year 2 Latin Literature Essay 1 February 15, 2004 Is it appropriate to describe Virgil Aeneid book four as a tragedy? The Aeneid as written by Virgil is the great epic of one man who followed his destiny. He was both aided and hindered in his travels by the gods who watched his movements with great interest. But Aeneas was a hero, he understood what he was fated to do, what destiny needed fulfilling and despite great set backs, of war and loss, Aeneas forges on to complete his task of founding Rome. The Aeneid is in certain respects a poem of tragedy, of what must be lost to regain anything more and in the first books of the poem this loss is focused on. The destruction of Troy, the ruin of a city and of the honorable men within, a city that held against the sons of Atreus for ten years but finally was brought down. Aeneas' personal losses in his wife and father, necessary though the former may have been, to allow Aeneas to begin a new family line, it was a painful loss. ...read more.

He constructs a situation for Aeneas to display his dedication, simultaneously forming a set of circumstances that make way for tragedy, for drama in the early parts of the poem. Virgil has been required in his epic to draw out Aeneas' journey so that he may grow into a hero who was great enough to found Rome, along this journey he must be tested by grief and prove his capabilities as a leader. The first few books of the Aeneid have covered the excitement of war and constant movement, Aeneas cannot linger too long, and audience would weary of him and Virgil thus generates a commotion, the death of Dido, a tragedy that has been formed for these purposes. The nature of tragedy is called into question with the Dido-Aeneas affair. What troubles brought Aeneas to Dido, what caused him to leave, the culture of the ancient Romans, the misunderstanding of the characters, what each has encountered in their lives previous to their meeting and what their parting does to each of them. These subjects all lead to the end of the affair between Dido and Aeneas and to later conflicts but therein lies the tragedy and whether this particular chapter in the Aeneid qualifies as a tragedy. ...read more.

was public, without glory, and a terribly sad end for a queen, a life cut short that could have been lived longer and successfully. There are to tragedy many pieces, from the structure to the emotions; the same lies in the Aeneid book four. It is the story of the end of a good woman who loved deeply a man out of her reach, fated to greater things than her. Virgil drew from the Greeks before him and fashioned a poem into tragedy drawing on the emotional pieces of conventional tragedy to enhance his own tragic heroine. Her ending is terribly tragic due to the futility of her passing. She was a young woman, a queen, who would have found suitors elsewhere. She was a victim of the gods whim, her own fate and Aeneas', but she was to die at her own will, for whatever reasons, be they Virgil's literary desires, the whim of a god or fate. Book four becomes tragic because it finishes with death. Any love that does not happen for any reason is a tragedy. Tragedy is defined by the audience who witness the events, to me, book four of the Aeneid is tragic for its loss of hope and a life. ...read more.