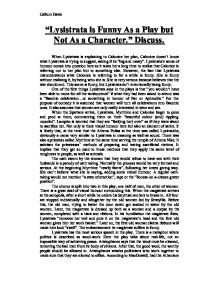 &quot;Lysistrata is Funny As a Play but Not As a Character.&quot; Discuss.

"Lysistrata is Funny As a Play but Not As a Character." Discuss. When Lysistrata is explaining to Calonice her plan, Calonice doesn't know what Lysistrata is trying to suggest, asking if its "big and meaty". Lysistrata's sense of humour comes into question here as it takes her a long time to realise that Calonice is referring not to her plan but to something else. However, the fact that Lysistrata misunderstands what Calonice is referring to for a while is funny. She is funny without realising it, by being who she is. She is very serious because believes that the war should end. This scene is funny, but Lysistrata isn't intentionally being funny. One of the first things Lysistrata says in the plays is that "you wouldn't have been able to move for all the tambourines" if what they had been asked to attend was a "Bacchic celebration...or something in honour of Pan or Aphrodite." For the purpose of comedy it is assumed that women will turn all celebrations into Bacchic ones. It also assumes that women are only really interested in wine and sex. When the Spartans arrive, Lysistrata, Myrrhine and Calonice begin to poke and prod at them, commenting them on their "beautiful colour (and) rippling muscles". ...read more.

He says that men "pander" to women's vices and that they "positively teach them to be wicked". The innuendo appears when he talks about what happens when men take women to the goldsmiths. They explain that the "pin slipped out of the hole" and that it was ok for the goldsmith to go to their house to "fit a pin in her hole". He also suggests that when they go to the shoemaker's, there is a "strapping young lad with a great strapping organ", again saying it was ok for them to go to the house to "loosen it up, (and) make the opening a little wider". He is implying that trusting women and other men to be together is impossible, and that in doing so it's no surprise that this strike and the taking over of the acropolis have happened. A scene where Lysistrata the character is funny as well as the play is when some of the women are trying to escape the Acropolis in order to find their husbands, some of them with poor excuses. One woman is apparently worried about "moths...eating (the fleeces)". There is innuendo when the woman says that she will "only spread them on he bed", to which Lysistrata replies "You're not spreading anything on any bed." The second woman says she has "forgotten to peel the bark" of her "superfine flax". ...read more.

The Spartans say they would like Pylos, describing it as a round hill, and pointing to "reconciliation's bottom". They say they have been "probing aroond it for years". The reference to the Spartan's "probing" around something represented using reconciliation's bottom is referring to the Spartans' perceived sexual tastes. The Athenians then demand the "prickly bushes and Malian Gulf" as well as the "long legs - (he) mean(s) walls of Megara". The Athenians are asking for a place called Echinus. Echinos is the Greek word for pubic hair. Therefore the Malian "Gulf" is self explanatory in the passage as it is being described as being behind the "prickly bushes". Even Lysistrata is caught out by their references. She says, trying to make sure that the two sides do not argue, not to "quarrel over a pair of legs - I mean walls." She is trying to be serious. The fact that she is caught out like that makes her funny - even if she doesn't intend to be. After this, both the Athenian and the Spartan think their job is done and say what they intend to next, the Athenian saying he is ready to "get down to some husbandry", the Spartan saying that he wants to "get stuck in the muck." These are references to agricultural practices but also are sexual connotations. ...read more.