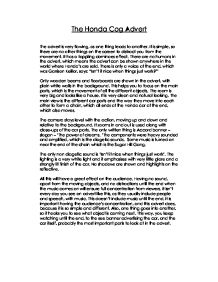 The Honda Cog Advert The advert is very flowing, as one thing leads to another. It is simple, so there are no other things on the screen to distract you from the movement. It has a toppling dominoes effect. There are no humans in the advert, which means the advert can be shown anywhere in the world where Honda's are sold. There is only a voice at the end, which was Garrison Keillor, says: "Isn't it nice when things just work?'' ...read more.

The camera stays level with the action, moving up and down and relative to the background. It zooms in and out is used along with close-ups of the car parts. The only written thing is Accord banner - slogan - 'The power of dreams. 'The components were heavy sounded and amplified, which is the diagetic sounds. Some music is turned on near the end of the chain which is the Sugar Hill Gang. The only non diagetic sound is 'Isn't it nice when things just work'. ...read more.

It isn't every day you see an advert like this, as they usually include people and speech, with music. This doesn't include music until the end. It is important having the audience's concentration, and this advert does, because it is so simple and different. Also, one thing goes into another, so it hooks you to see what object is coming next. This way, you keep watching until the end, to the see banner advertising the car, and the car itself, probably the most important parts to look at in the advert. ...read more.