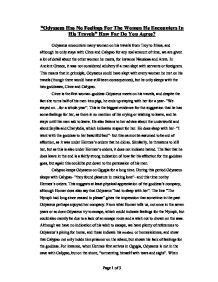 "Odysseus Has No Feelings For The Women He Encounters In His Travels" Haw Far Do You Agree? Odysseus encounters many women on his travels from Troy to Ithica, and although he only stays with Circe and Calypso for any real amount of time, we are given a lot of detail about the other women he meets, for instance Nausicaa and Arete. In Ancient Greece, it was not considered adultery if a man slept with servants or foreigners. This means that in principle, Odysseus could have slept with every woman he met on his travels (though there would have still been consequences), but he only sleeps with the two goddesses, Circe and Calypso. Circe is the first woman-goddess Odysseus meets on his travels, and despite the fact she turns half of his men into pigs, he ends up staying with her for a year- "We stayed on...for a whole year". This is the biggest evidence for the suggestion that he has some feelings for her, as there is no mention of his crying or wishing to leave, and he stays until his men ask to leave. ...read more.

For instance, when Hermes first arrives in Ogygia, Odysseus is not in the cave with Calypso, but on the shore, "tormenting himself with tears and sighs". When Calypso finds him there later, his "eyes were wet with weeping as they always were", and when she offers him help to leave, he announces that going home is his "never-failing wish". Calypso offers him immortality, but his love for his wife is too strong, and this implies that he cannot have feelings for another. This is echoed by the line "never for a moment did she [Calypso] win my heart", which is what Odysseus says to Alcinous about his time with Calypso. When he does eventually leave the island, it is "with a happy heart", and this too shows his wish to leave Calypso and her island far behind. All in all, Odysseus describes the way he ends up on the island as a "misfortune", and that sums up his feelings for Calypso quite well. The next woman Odysseus meets is mortal, though distantly descended from Poseidon. ...read more.

Overall I consider that Odysseus does not care about these women. He loves his wife dearly- "[Penelope] is never out of your thoughts"- and is happy to leave every island he sets foot upon if he thinks he is heading for home. Circe does seem to hold a certain place in Odysseus' heart, because she is the one he stays with voluntarily and has to be persuaded to leave, but Odysseus leaves the others without a backward glance- "with a happy heart" in fact, in the case of Calypso. Odysseus's affection and respect for Nausicaa seems to be purely polite and possibly only to suit his own means, or at the most brotherly- he wants the best for her. As for Arete, Odysseus never had affectionate feelings for her. He needs her support to get home, and this is the only reason he shows respect for her, except perhaps because she is a wise woman. Throughout the Odyssey, Odysseus longs for his homeland, and is unable to feel much but grief at his prolonged absence. Page 1 of 3 ...read more.