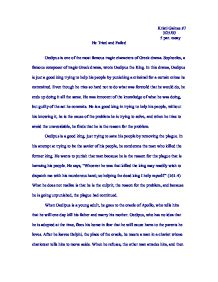 Oedipus - He tried and failed.

Kristi Gaines #7 3/25/03 5 par. essay He Tried and Failed Oedipus is one of the most famous tragic characters of Greek drama. Sophocles, a famous composer of tragic Greek drama, wrote Oedipus the King. In this drama, Oedipus is just a good king trying to help his people by punishing a criminal for a certain crime he committed. Even though he tries so hard not to do what was foretold that he would do, he ends up doing it all the same. He was innocent of the knowledge of what he was doing, but guilty of the act he commits. ...read more.

(161-4) What he does not realize is that he is the culprit, the reason for the problem, and because he is going unpunished, the plague had continued. When Oedipus is a young adult, he goes to the oracle of Apollo, who tells him that he will one day kill his father and marry his mother. Oedipus, who has no idea that he is adopted at the time, flees his home in fear that he will cause harm to the parents he loves. After he leaves Delphi, the place of the oracle, he meets a man in a chariot whose charioteer tells him to move aside. When he refuses, the other man attacks him, and then Oedipus turns and kills them all. ...read more.

After everything starts to come together, he realizes what had happened, and that he has done exactly what he did not want to do. He killed the father he never knew, and he is married to the woman who gave birth to him. He is just a king trying to help his people, and in trying to help his people, unknowingly condemns his own self. He left the only parents that he ever knew and loved, then killed his father and then marries the woman who conceived him. He has gone unpunished for killing his father, the late king of Thebes, and therefore a plague has fallen upon his people. He is trying to support his people; in helping them he condemns his own self without knowing it, and finds out that no one can avoid the unavoidable. ...read more.