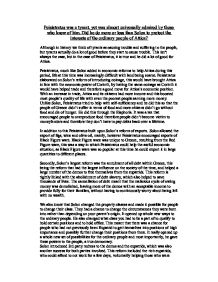 Peisistratus was a tyrant, yet was almost universally admired by those who knew of him. Did he do more or less than Solon to protect the interests of the ordinary people of Attica?

Peisistratus was a tyrant, yet was almost universally admired by those who knew of him. Did he do more or less than Solon to protect the interests of the ordinary people of Attica? Although in history we think of tyrants as causing trouble and suffering to the people, but tyrants actually do a lot of good before they start to cause trouble. This isn't always the case, but in the case of Peisistratus, it is true and he did a lot of good for Attica. Peisistratus, much like Solon added in economic reforms to help Attica during this period, life at this time was increasingly difficult with land being scarce. Peisistratus elaborated on Solon's reform of introducing coinage, this would have brought Attica in line with the economic power of Corinth, by having the same coinage as Corinth it would have helped trade and therefore a good move for Attica's economic position. With an increase in trade, Attica and its citizens had more income and this boosted most people's quality of life with even the poorest people earning more money. ...read more.

This reform is tightly linked with the abolishment of debt slavery, which also helped to save thousands of lives. The cancellation of debt meant that the malicious cycle of owing money was demolished, leaving more of the demos with an acceptable income to provide fully for their families, without having to continuously worry about being left with no wealth. We also know that Solon changed the property classes and made it possible for people to change their class. They had a chance to change the circumstances they were born into rather than depending on your parent's origin. It opened up whole new ways to the ordinary people. He also changed what class you had to be a part of to qualify to hold certain positions and to hold office. This meant that there was a chance for people who had not previously been Eupatrid to get themselves into positions of high importance and possibly further change their positions from there. ...read more.

This helped to make law and order in Greek society more structured, and also fairer to those who were wrongly convicted, which occurred frequently before the introduction of 3rd part redress and actual writing down of the laws. Although, Peisistratus did not add much to these reforms by Solon, but he also didn't abolish the laws and the whole 3rd party redress because I'm sure Peisistratus could see the positive impacts it had on Attica and it would be better if he kept the laws. On the other hand, Peisistratus introduced a system of travelling judges so that those who lived in rural areas of Greece could also receive the correct justice that they were entitled to, along with the population of Athens and Attica. These traveling judges were set up so that demos who had to work and couldn't miss days to travel to go to court without wasting time and that all cases were seen. ...read more.