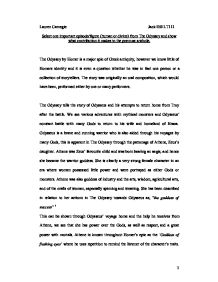 Select one important episode/figure (human or divine) from The Odyssey and show what contribution it makes to the poem as a whole.

Lauren Carnegie Jack Hill LT111 Select one important episode/figure (human or divine) from The Odyssey and show what contribution it makes to the poem as a whole. The Odyssey by Homer is a major epic of Greek antiquity, however we know little of Homers identity and it is even a question whether he was in fact one person or a collection of storytellers. The story was originally an oral composition, which would have been, performed either by one or many performers. The Odyssey tells the story of Odysseus and his attempts to return home from Troy after the battle. We see various adventures with mythical monsters and Odysseus' constant battle with many Gods to return to his wife and homeland of Ithaca. Odysseus is a brave and cunning warrior who is also aided through his voyages by many Gods, this is apparent in The Odyssey through the patronage of Athene, Zeus's daughter. Athene was Zeus' favourite child and was born bearing an aegis, and hence she became the warrior goddess. She is clearly a very strong female character in an era where women possessed little power and were portrayed as either Gods or monsters. Athene was also goddess of industry and the arts, wisdom, agricultural arts, and of the crafts of women, especially spinning and weaving. ...read more.

Here he gains status with the suitors and the listener and they begin to respect him to a certain extent. Homer describes Odysseus' physical attributes therefore building our mental picture of a great man and a great threat to the suitors, "As a result, all the suitors were lost in amazement, and significant glances and comments were made."10 By their reaction we see that Odysseus is clearly a man of some considerably strength, but also that the suitors are inferior to Odysseus stature. Just as Athene provokes Odysseus we see her use the same method to manipulate Telemachus into going to Pylos and Sparta. She appears as a trusted family friend, Mentes, and advises Telemachus of what he should do in order to gain information about his father's whereabouts. However the real reason for this voyage is to keep him away from the suitors because they desire to kill him, but also to establish himself as a man before he meets his father again. She tells Telemachus where he should go and at the same time informing the reader of the events to come, but not of the consequences when he reaches his destinations. Homer uses Athene to hint at the coming events and the adventures that Telemachus will encounter. ...read more.

This is most apparent within the first exchange between Athene and her father, Zeus, (I .45-106) where they discuss Odysseus' travels up to his imprisonment on Ortygia. This device is used due to the confused chronological order that Homer uses. This is one of the many types of contributions that Athene makes to The Odyssey, however she herself summarises her role within the poem, "And here I am once more, to contrive a cunning scheme with you, to hide the treasures of the Phaeacian nobles, prompted by me, gave you when you left for home, and to warn you of all the trials you will have to undergo within your palace."17 Here she states the basis of her role, the creation of plans; the attainment of wealth; and the informing of events. Athene completes these in many ways to contribute to Odysseus' travels and the story as a whole. We see her plotting with Odysseus and Telemachus against the suitors and various mythical monsters while acquiring treasures to enhance the wealth of Odysseus. However her main role appears to be that of advising in her various forms to progress the story and direct the characters to their various stations. She does not physically action many situations, but encourages others to do so. Generally she a very important character within The Odysseus but is given little credit within the story as a whole. ...read more.