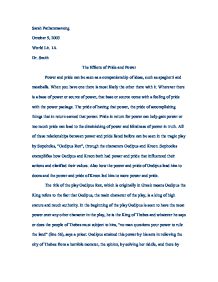 The Effects of Pride and Power

Sarah Pathammavong October 9, 2003 World Lit. 1A Dr. Smith The Effects of Pride and Power Power and pride can be seen as a companionship of ideas, such as spaghetti and meatballs. When you have one there is most likely the other there with it. Wherever there is a base of power or source of power, that base or source come with a feeling of pride with the power package. The pride of having that power, the pride of accomplishing things that in return earned that power. Pride in return for power can help gain power or too much pride can lead to the diminishing of power and blindness of power in truth. All of these relationships between power and pride listed before can be seen in the tragic play by Sopohcles, "Oedipus Rex", through the characters Oedipus and Kreon. Sophocles exemplifies how Oedipus and Kreon both had power and pride that influenced their actions and clarified their values. Also how the power and pride of Oedipus lead him to doom and the power and pride of Kreon led him to more power and pride. The title of the play Oedipus Rex, which is originally in Greek means Oedipus the King refers to the fact that Oedipus, the main character of the play, is a king of high stature and much authority. In the beginning of the play Oedipus is seen to have the most power over any other character in the play, he is the King of Thebes and whatever he says or does ...read more.

Kreon is another character in the play that is what would be called second in command in Thebes. Kreon is the brother of the queen. His powers pertain to those like the king but not to full potential as the king. Kreon is highly respected in Thebes because he is the brother of the king. Also it seems that he is well liked by society, most likely from past gratitude that he had shown, this is proved when Kreon and Oedipus are in a quarrel Choragos stands up for Kreon, reminding the king the Kreon has been a loyal friend to the king. Though in comparing the power of the king in the beginning of the play and the power of Kreon in the beginning of the play Oedipus has the upper hand. Kreon is still subject to Oedipus's rule. Though it is true that Kreon has similar powers but does not have the same responsibilities and does not wish to have it any other way, "power with all the king's anxieties, to that same power and the grace of sleep? Certainly not I."(552-54). By the end of the play Kreon seemed to gain the upper hand over Oedipus, because Oedipus gives the rest of his powers that he yet has not lost to Kreon, such as taking care of his daughters and most likely taking over as king, "you are the only father my daughters have"(1444). ...read more.

Now as for Kreon it is not so much alike. Kreon does not flaunt his pride around as much as Oedipus in this play. However he still stand up for himself and prides himself in the fact that he is a man and of high stature and does not want his reputation to be dirtied no matter what cause, "I do not value like in this dishonor"(492). Also it is established that Kreon values the protection of the people and not just his power. He does all in his power to find out how to save the city, and does not blame anyone for his mistakes. Unlike Oedipus, Kreon in the end gained some pride in the fact that he was right in his methods of helping the city and Oedipus was wrong, he had earned the upper hand in the relationship between Oedipus and himself, he tells Oedipus to "think no longer that you re in command here"(1465) and the fact that Oedipus is now begging at Kreon, "and what is it you turn to me begging for?"(1380). So in conclusion, in the beginning of the play Oedipus had all the power and all the pride and Kreon was second in power and less public with pride. And in the end Kreon came out on top of Oedipus, whose downfall was caused by too much power and pride. Because with power your gain pride and with more pride you become obsessed and blind to reality causing you to drop drastically, which is a characteristic in tragic plays, losing power and eventually losing pride, because there is no more power to have pride in. ...read more.