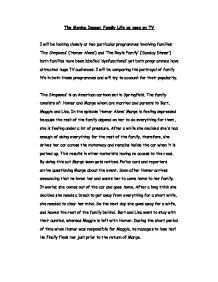 The Moving Image: Family Life as seen on TV I will be looking closely at two particular programmes involving families: 'The Simpsons' ('Homer Alone') and 'The Royle Family' ('Sunday Dinner') both families have been labelled 'dysfunctional' yet both programmes have attracted huge TV audiences. I will be comparing the portrayal of family life in both these programmes and will try to account for their popularity. 'The Simpsons' is an American cartoon set in Springfield. The family consists of: Homer and Marge whom are married and parents to Bart, Maggie and Lisa. In the episode 'Homer Alone' Marge is feeling depressed because the rest of the family depend on her to do everything for them, she is feeling under a lot of pressure. After a while she decided she's had enough of doing everything for the rest of the family, therefore, she drives her car across the motorway and remains inside the car when it is parked up. This results in other motorists having no access to the road. By doing this act Marge soon gets noticed. Police cars and reporters arrive questioning Marge about the event. Soon after Homer arrives announcing that he loves her and wants her to come home to her family. ...read more.

The first character to be introduced is Bart; he has yellow skin and hair. He's in detention writing on the black board which immediately gives us the impression that he's mischievous. As soon as the bell goes, he rushes out of school as quickly as possible. We then meet Homer; he is working with radioactive materials at his work and as soon as his bell goes he rushes out to go home as soon as possible being extremely careless as he leaves. Marge and Maggie are then in the car on the way home. Lisa is at band practice, she is playing her instrument proudly. We then go back to see Marge and Maggie in the car, Marge obviously has a big influence on Maggie because she copies everything she does. When Marge beeps her horn so does Maggie. She has her own toy steering wheel in the passenger seat, she steers exactly the same ways as Marge pretending to be driving just like her mum. The credits appear and the programme begins. In the opening sequence there are 23 shots of different situations in a short time of one minute and fourteen seconds. ...read more.

I think that 'The Royle Family' is targeted at adults. It doesn't appeal to children as there aren't bright colours, it hasn't got a busy atmosphere and there isn't enough slapstick, simple humour throughout for them to laugh at. Adults would find it funny because it's just like real life; everything they say or do is just like a typical family, like our own. Both programmes are extremely popular in different ways. 'The Simpsons' is funny because of the family's continuous sayings and jokes. The actions they do are so unrealistic that it's just so funny and the family always have terrible things happening to them, but always manage to get through it. 'Homer Alone' Homer loses Maggie but she is luckily found safe and sound just prior to the return of Marge. 'The Royle Family' is popular because of the way it is filmed and presented. No extra lighting or special effects have been used to create a more exciting set. It is dull and just how it would be in a normal house. It's so realistic that it looks like there are hidden cameras in house and they're just filming them without them knowing. It is popular because people enjoy watching people like themselves, they can see what real family life is like. ...read more.