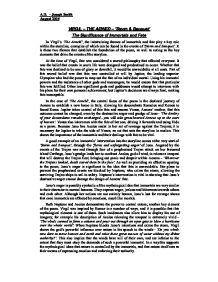 The Significance of Immortals and Fate in Virgil's 'The Aeneid'.

VIRGIL - THE AENIED - 'Storm & Banquet' The Significance of Immortals and Fate In Virgil's 'The Aeneid', the intertwining themes of immortals and fate play a key role within the storyline, examples of which can be found in the events of 'Storm and Banquet'. It is these two themes that establish the foundation of the poem, as well as acting as the key elements that drive the events of the storyline. At the time of Virgil, fate was considered a sacred philosophy that affected everyone. It was the belief that events in one's life were designed and predestined to occur. Whether that fate was destined to be one of glory or downfall, it would be unavoidable at all costs. Part of this sacred belief was that fate was controlled at will by Jupiter, the leading superior Olympian who had the power to map out the fate of an individual mortal. Using his immortal powers and the assistance of other gods and messengers, he would ensure that that particular fate was fulfilled. Other less significant gods and goddesses would attempt to intervene with his plans for their own personal achievement, but Jupiter's decisions are always final, making fate inescapable. ...read more.

Both Neptune and Aeolus demonstrate the power to control nature; another key element of the poem. Virgil was inspired by Homer in a number of ways, and it is possible that this mythological element is one of them. Such incidences also allow him to display his use of imagery; for example his description of Aeolus releasing the tempest is extremely vivid - 'The winds seemed to form a column and pour out through an open gate to blow a hurricane over the whole world'. When Neptune blocks Juno's intentions and calms the storm, Virgil shows the god's powerful influence over nature in his speech to the winds - 'Do you winds now dare to move heaven and earth and raise these great masses of water without my divine authority?'. This also implies that the winds have will of their own, and are inferior to the extent that they must obey the demands of such a powerful immortal. In a way this supports the mythological ideas that nature is controlled by the immortals, and that nature itself acts as their means of expressing emotion and enforcing their authority. It is likely that the immortals were used as a way of promoting pride in Rome. ...read more.

This is shown through Aeneas' words the moment that Venus turns away and her immortal beauty is revealed - 'Why am I never allowed to take your hand in mine, to hear your true voice and speak to you as you really are?'. Venus makes one final intervention into the storyline at the end of 'Storm and Banquet'. In an attempt to save her son from Juno's manipulation that may stir the people of Carthage to turn against Aeneas, she sends Cupid to Dido in the form of Aeneas' son Ascanius. Being the god of sexual passion, Cupid places with the queen an infatuation for Aeneas that will save him from being attacked by Juno. However, it is this passion that will lead to Dido's own downfall. In conclusion, I feel that the intertwining theme of immortals and fate are the key elements of the 'The Aeneid'. Fate is controlled by the will of the gods and is unavoidable, there fore it is these two important factors that drive the storyline, events having been planned out beforehand. The actions of the immortals also help us to understand the philosophies and beliefs of the people at the time and how they possibly viewed the natural world, as well as the mythological influences from Homer that helped to inspire Virgil. A.D. - Joseph Smith August 2004 ...read more.