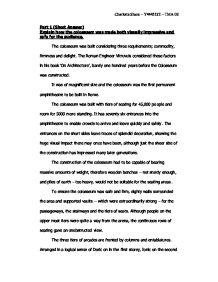 Explain how the colossuem was made both visually impressive and safe for the audience.

The colosseum was built considering three requirements; commodity, firmness and delight. The Roman Engineer Vitruvuis considered these factors in his book ‘On Architecture’, barely one hundred years before the Colosseum was constructed.

It was of magnificent size and the colosseum was the first permanent amphitheatre to be built in Rome.

The colosseum was built with tiers of seating for 45,000 people and room for 5000 more standing. It has seventy six entrances into the amphitheatre to enable crowds to arrive and leave quickly and safely. The entrances on the short sides leave traces of splendid decoration, showing the huge visual impact there may once have been, although just the sheer size of the construction has impressed many later generations.

The construction of the colosseum had to be capable of bearing massive amounts of weight, therefore wooden benches – not sturdy enough, and piles of earth – too heavy, would not be suitable for the seating areas.

To ensure the colosseum was safe and firm, eighty walls surrounded the area and supported vaults – which were extraordinarily strong – for the passageways, the stairways and the tiers of seats. Although people on the upper most tiers were quite a way from the arena, the continuous rows of seating gave an unobstructed view.

The three tiers of arcades are fronted by columns and entablatures. Arranged in a logical sense of Doric on in the first storey, Ionic on the second story and Corinthian in the third. Above these columns is an attic story with Corinthian pilasters and small square window openings.

A canopy, called the velarium, provided shelter for the spectators and was suspended from masts which were carried by brackets and sockets. Although the mechanism or how the canopy was drawn across the arena is unknown, we do know this how it was used.

As well as shelter the spectators required refreshments which were given by fountains installed on the landings, served by pipes with water. This met the requirement of commodity.

The way the building elements were arranged provided delight. (336)

Assess the attitudes shown towards gladiators by roman Society.

In Roman society the Gladiators provided entertainment for all levels of the society. They performed in the amphitheatre which Vespian created for this purpose and were usually condemned criminals who deserved to be punished. However not all gladiators were condemned criminals, some of the gladiators had chosen to become so and took an oath. They were free born and although we cannot be certain why they would choose a profession so low, we can speculate that maybe the loss of all his property would make him turn to this way of life.

What fascinated the Romans the most about the gladiators was the fact that these men were essentially dead men who may come back to life. A brave fighter may rise from the dead and rejoin society.

Another type of gladiator was defeated military opponents or those who refuse to accept the benefits of subjection to the Roman orders. To fight Rome was to rebel. Those rebels therefore forfeited the right to any place within their society. These people deserved death and were subjected to any form of torture from being condemned to crucifixion, thrown to the wild beasts or to fighting as a gladiator. Most gladiators however were slaves subjected to Gladiator schools involving excruciating training. They were fed on high energy diets and given expert medical attention. They were ‘owned’ by their trainer and were an expensive investment.

The Roman society revelled in this sort of entertainment and it had the same effect on the mind as a strip tease show does. Losing all control over rational thought. This is shown in an extract from St. Augustine – Confessions – The story of Alypius.

‘He became obsessed with an extraordinary craving for gladiatorial shows. At first he detested those displays and refused to attend them. But one day during the season for this cruel and blood thirsty sport, he happened to meet some friends….’’You may drag me there bodily but do you imagine that you can make me watch the show and give my mind to it…Alypius shut his eyes tightly…if only he had closed his ears as well…this thrilled him so deeply that he could not contain his curiosity…when he saw the blood he had drunk a deep draught of savage passion…’

Today the idea of gladiators fighting to the death is viewed as a brutal and barbaric sport although in Roman society the sport was an entertainment and the spectators revelled in the bloodshed. There were still differences of opinion in Roman society, for example Seneca writes in his ‘Letter 7’

‘…which human eyes could take a rest from human blood, it was quite the opposite. All the fights beforehand were acts of mercy in comparison. Now the frivolities were banished and we are offered sheer butchery…The only outcome for the combatants is death…’

Seneca obviously does not agree with the spectacle of death, even though combatants in question were criminals and killed other people.

‘So what? Because he killed he deserved this fate? But what have you done, poor wretch to deserve this spectacle?’

This view reflects the view of modern society.

The role of the gladiator has become increasingly prominent in the depiction of the gladiators in art forms. They were considered worthy enough to be depicted in mosaics, some of which were found in Germany. In the Nennig Mosaic for example the gladiators are depicted or portrayed as strong individuals fighting animals or each other.

As well as visual evidence depicted in the art forms the educated of the time were able to show their opinion in written form. Cicero, a famous orator and politician expresses his opinions about the gladiators.

‘I know that in the eyes of some people the gladiatorial combats are a cruel and inhuman spectacle; and perhaps they are not wrong considering the way in which the combats are given today. But in the days when it was criminals who killed one another, no lesson in how to endure in the face of pain and death could be more effacious at least among those addressed not to the ears but to the eyes[…] These gladiators, these rogues, these barbarians, to what length do they carry their strength of mind..’’

It seemed also that the Christian fathers scorned the games not because they were brutal or barbaric but because of the loss of self control of the spectators who were from all walks of life and religions including Christianity.

The skills of the gladiators in their fighting ways and technique were considered an art form and were though to have been studied, watched and displayed and such.