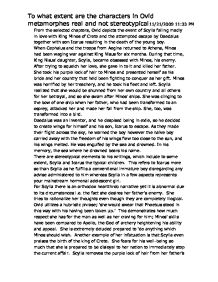 From the selected chapters, Ovid depicts the event of Scylla falling madly in love with King Minos of Crete and the attempted escape by Daedalus together with son Icarus resulting in the death of the young boy. When Cephalus and the troops from Aegina returned to Athens, Minos had been waging war against King Nisus for six months. During that time, King Nisus' daughter, Scylla, became obsessed with Minos, his enemy. After trying to squelch her love, she gave in to it and killed her father. She took his purple lock of hair to Minos and presented herself as his bride and her country that he'd been fighting to conquer as her gift. Minos was horrified by her treachery, and he took his fleet and left. Scylla realized that she would be shunned from her own country and all others for her betrayal, and so she swam after Minos' ships. She was clinging to the bow of one ship when her father, who had been transformed to an osprey, attacked her and made her fall from the ship. ...read more.

Scylla removes the purple lock of hair from her father's head, which was the safeguard to the kingdom, and in doing also, takes off his head! In this way she does not satisfy a typical teenage girl, as most people do not turn into savage monsters to retrieve what they desire, stooping so low as to murdering their own blood. Scylla is so disturbed that she cannot understand why she appears unattractive to Minos. Icarus is an archetypal boy as he is unobservant to his own dangers to the degree that he even 'hinders' the amazing work thus contributing to his own peril i.e. while studying his father at work inventing an escape mechanism. Daedalus warns his son about the possible hazards they are exposed to yet Icarus decides to deliberately discount this advice and do exactly what he was instructed not to. Icarus soon becomes vulnerable with his 'wax softening' and his 'wings unable to grip air' concluding with his fatal descent into the dark blue water. Icarus is an example of your stereotypical disobedient child yet is unable to discover his mistakes, as others are able to. ...read more.

This is satirical, as all the bloodshed that occurred did not contribute to the ultimate outcome. Additionally when Nisus dies, he is transformed into a sea eagle, which later goes on to attack Scylla as she desperately clings on to the ship of Minos. She falls off, but instead of drowning is also turned into a bird herself. Another example involves Icarus' involvement in 'hindering' his father's invention leading to the boy's eventual death. In conclusion, there are formulaic rudiments to Ovid's poem yet from the evidence above one can see that his writings are original and do not mirror classic tales. It is an impartial piece, so there is an indistinct side to the poem, permitting the audience to form their own judgments. Generally I do not think that the statement 'Ovid Metamorphoses VIII is a poem with no real characters only stereotypes,' is reflective of this section, as I believe that stereotypes are based around opinion, which is not featured in the verse. By Josh Leader 3205 Weymouth To what extent are the characters in Ovid metamorphes real and not stereotypical 11/11/2009 22:08 11/11/2009 22:08 11/11/2009 22:08 ...read more.

The candidate has responded well to the question, and it is clear that the candidate has a sound knowledge and understanding of chapter eight of the Metamorphoses, and is able to develop his thoughts on the text in quite some ...

The candidate has responded well to the question, and it is clear that the candidate has a sound knowledge and understanding of chapter eight of the Metamorphoses, and is able to develop his thoughts on the text in quite some detail, skillfully comparing the roles of Scylla and Icarus. However, the question is much more general than that, Ã¢â‚¬Å“To what extent are the characters in OvidÃ¢â‚¬â„¢s Metamorphoses real and not stereotypical?Ã¢â‚¬Â ; when presented with such a question in the examination a candidate should address the roles of all characters in chapter 8, including Minos, Nisus, Ariadne and Daedalus, even if they are only briefly mentioned in the text. Mark schemes for AS level Latin usually specify that the candidate cover the whole of the text, and by not doing so a candidate is risking losing a substantial amount of marks.

The analysis provided by the candidate here is very good. He has quoted directly from the text, referred to literary tropes and archetypes (of which he displays a very good understanding) referenced in the text and there is some use of technical terminology. His analysis of Scylla and Icarus is very good, there is a clear and convincing argument being followed, and he discusses the different aspects of Scylla's psychology very well. However, there are many ways in which this essay could be improved. The discussion of the use of language or literary techniques within the poem is a bit limited, and the candidate could also include a great deal more quotation from the text itself (in English or Latin, ideally both). There could also be some reference to the influence of Greek epic on the Metamorphoses, for example the use of hexameter, epithets, Greek accusatives etc, as these are Greek myths after all which Ovid is developing. Does he stick to the original stories? Is he being entirely serious? What novel elements does he introduce? Nevertheless, what the candidate has written so far is very good, and examiners will understand that the scope of an answer to an essay question such as this is limited by the time available in the examination. The most important point for improving this essay is covering the minor characters who appear in chapter 8 in more depth.

The essay is generally very well written, although there are a few spelling mistakes here and there (including in the title!) which could be eliminated with proofreading. It is a good idea for candidate to read over their work during any time they have left in the exam to eliminate any spg errors, as these create a bad impression on the examiner. There is a clear structure to the essay which makes the candidateÃ¢â‚¬â„¢s argument very clear, but it does not obtrude too much on the reader or make the essay seem too formulaic, which is ideal. Overall a very good piece of work.