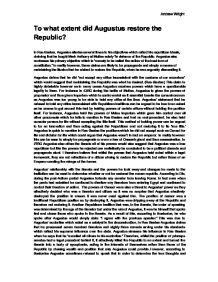 To what extent did the Roman emperor Augustus restore the republic?

To what extent did Augustus restore the Republic? In Res Gestae, Augustus alludes several times to his objectives which reflect his republican ideals, claiming that he fought Mark Anthony at Mutina solely "in defence of the Republic. Augustus also confesses his primary objective which is "namely to be called the author of the best form of constitution." In reality however, these claims are likely to be propaganda and simply a means of maintaining the illusion that he wished to restore the Republic, when he was arguably dismantling it. Augustus claims that he did "not accept any office inconsistent with the customs of our ancestors" which would suggest that maintaining the Republic was what he desired. (Res Gestae) This claim is highly debatable however as in many cases Augustus receives powers which have a questionable legality to them. For instance in 43BC during the battle of Mutina, Augustus is given the powers of propraetor and thus given imperium which is controversial as it essential breaks the cursus honorum as Augustus was too young to be able to hold any office at the time. Augustus' statement that he refused to hold any office inconsistent with Republican traditions can be argued to be true to an extent as he seems to get around this fact by holding powers of certain offices without holding the position itself. For instance, Augustus held the powers of Maius Imperium which gave him control over all other proconsuls which he fails to mention in Res Gestae and had no real precedent; he also held consular powers for life without accepting the title itself. ...read more.

As a result of this, according to Suetonius, he who spoke after Augustus would simply state "I agree with the previous speaker." This was due to Augustus' auctoritas which acted as a catalyst in the deconstruction, in Res Gestae Augustus claims that he possessed seven hundred Senators and eighty three consuls serving under his standards which reflect his supreme influence over the state. Augustus stresses his influence in Res Gestae when he says that he "excelled all others in his auctoritas." Therefore, whilst the position of princeps senatus had a legal precedent behind it, it effectively killed the Republic to an extent and turned the Senate into a body of sycophants, acting in the interests of themselves rather than those of the Republic by chasing wealth and position that only Augustus could provide. However, according to Suetonius Augustus sometimes refused to speak first in order to determine the true thoughts and opinions of the Senate which would imply that Augustus was in fact concerned with their opinions and verdicts which would absolve him to an extent of being an absolutist like emperor. Augustus also altered as to how the position of Praetor Urbanus was achieved, under the Republic this position was chosen by vote but under Augustus it was he who would select the praetor urbanus and the assemblies became much less important. The incident in Rome with Messalla in 26BC where he refused to hold the position of city prefect claiming that it went against the ...read more.

In conclusion, I therefore believe that Augustus did not restore the political powers of respublica as despite his political charades involving the rejection of certain titles such as Dictator for life there were still too many cases which overshadow this in which the powers that Augustus held were not in keeping with the traditions with the Republic, most notably consular powers for life and the controversial Maius Imperium which gave him absolute proconsular powers. Augustus' auctoritas and influence in the Senate house too granted him unconditional powers and mutated the institution into a body of sycophants which can also be seen as detrimental to the Republic. The changes and alterations Augustus made to the Senate also make evident the extent to which Augustus failed to restore the republic, notably the destruction of the positions of Censor and the weakening of the position of Aedile which were threats to Augustus and his principate. The creation of a hereditary Senate can be argued to be the most important argument in suggesting that Augustus had no intention of restoring the Republic as it greatly opposed traditional republican customs in the ancient world. It allowed Augustus to choose his successor Tiberius and thus reflects his monarchical ambitions and lack of concern for the Republic. I therefore conclude that Augustus did not in fact restore the political powers of the republic. "Do you see that?" uttered Jack in a tone comparoble ?? ?? ?? ?? Andrew Wright ...read more.