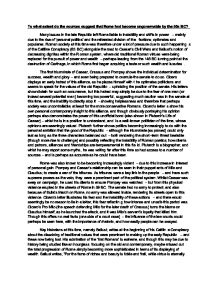 To what extent do the sources suggest that Rome had become ungovernable by the 50s BC? Many issues in the late Republic left Rome liable to instability and shifts in power - mainly due to the rise of 'personal politics' and the reiterated division of the factions; optimates and populares. Roman society at this time was therefore under a lot of pressure due to such happenings of the Catiline Conspiracy (63 BC) alongside the road to Caesar's Civil Wars and Sallust's notion of decreasing dignitas within the Roman system, where old traditional Roman virtues were being replaced for the pursuit of power and wealth - perhaps leading from the 146 BC turning point at the destruction of Carthage, in which Rome first began acquiring a taste or such wealth and luxuries. The first triumvirate of Caesar, Crassus and Pompey shows the individual determination for success, wealth and glory - and even being prepared to overrule the senate to do so. Cicero displays an early hatred of this alliance, as he places himself with the optimates politicians and seems to speak for the values of the old Republic - upholding the position of the senate. His letters show distain for such an occurrence, but this hatred may simply be due to the fear of one man (or indeed several potential men) becoming too powerful, suggesting much caution was in the senate at this time, and the inability to directly stop it - showing helplessness and therefore that perhaps society was uncontrollable; at least for the more conservative Romans. ...read more.

In Sallust's Speech of Macer in his Histories contemplate the same issues; drawing in particularly the point of corruption of 146 BC in the destruction of Carthage to be the turning point of Rome - in which wealth began to seep into Rome. In this speech the early Republic is drawn out as high and supreme, perhaps even idolized, but from all aspects of history, we can know that there is never a time when a society balances perfectly, and if no Romans at all were corrupt at this time, there would be no change to the society. Sallust was a salient historian on the time, but was very focused on condescending the contemporary invaluable, temperamental corrupt politicians of the late Republic, leading up to the 50s BC. Even Livy, in Beginnings of Luxury shows Rome to be liable to corruption and influences from the East, especially Asia Minor - the wealthiest part of the Empire. Livy was born in 59 BC, so would've been writing slightly after these events, but still is a contemporary of the late republic. In other works of Sallust, the Jugurthine War epitomizes the view he had about corruption invading Rome, whist beginning to explain (again the troubles between the two factions) Marius and Sulla. Another key theme for the instability and uncontrollability of Rome would be the senate's power verses that of the popular assembly - and the shift between the senate's power as the advisory body, to practically having no role, other than that of appearance. ...read more.

and almost immediately switched sides upon hearing - further suggesting or even reflecting the instability of Rome at this time. Sallust however can be incredibly bias, and was not known to be present, but could be seen to have been trying to replicate the happenings as truthfully as possible. Cicero's letters during this period also reflect a degree of uncertainty and therefore again reiterating the uncertainty that would be to come. Ultimately, the shift in power and influence in Rome had distinctly focused on individuals (namely the generals of armies, patron/client system for support) rather than the traditional advisory body of the senate. The increase in 'people power' towards the Roman citizens had altered the system to become very distinct to that of the early republic - and possibly the loss of control was simply due to this change. The rise of individual political success may have underpinned some individual's life goals - but is due to a number of reasons, primarily in the new found use of personal armies, with generals turning their soldiers into clients. The sources however acknowledge the panic the Romans reflected in such times as the beginnings of the triumvirate, the Catiline Conspiracy and the lead up to Civil War - agreeing with the initial term of Rome becoming 'ungovernable' as the sources suggest too many political hopefuls were fighting for power at the expense of the Republic - although perhaps Caesar's later powers suggest it was an inevitable shift, and would have simply happened with time in any case. ...read more.