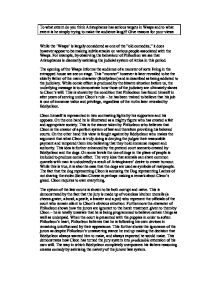 To what extent do you think Aristophanes has serious targets in Wasps and to what extent is he simply trying to make the audience laugh? Give reasons for your views

To what extent do you think Aristophanes has serious targets in Wasps and to what extent is he simply trying to make the audience laugh? Give reasons for your views While the 'Wasps' is largely considered as one of the "old comedies," it does however appear to be making subtle attacks on various people associated with the Wasps. For example, by observing the behaviour of Philocleon we see that Aristophanes is discreetly satirising the judicial system of Attica in this period. The opening of the Wasps informs the audience of a monster of sorts living in the entrapped house we see on stage. This "monster" however is later revealed to be the elderly father of the main character (Bdelycleon) and is described as being addicted to the judiciary. While comic effect is produced by the bizarre situation before us, the underlying message is to demonstrate how those of the judiciary are ultimately slaves to Cleon's will. This is shown by the condition that Philocleon has found himself in after years of serving under Cleon's rule - he has been trained to believe that his job is one of immense value and privilege, regardless of the truths later revealed by Bdelycleon. ...read more.

When the court is presented with the puppies in order to soften Philocleon's heart, Philocleon believes that he is following his own devices in remaining uninfluenced by their appearance. This further shows the ignorance of the jurors as despite Philocleon's unwavering stance he end up making the decision that Bdelycleon always wanted him to make, and always expected he would make. This demonstrates how Cleon has turned the jury system into predictable extension of his own will. The way in which Bdelycleon completely overpowers his fathers reasoning creates comedy by satirising the naivety of the jurors/ law system. The relationship between Philocleon and Bdelycleon has been deliberately included to offer both sides of the argument over Cleon and the jury system. This helps to emphasise the faults of both. On the other hand by giving them entirely conflicting personalities we see a lot of humour generated. It is a comedy device comparable to modern comedies in that wit is produced through strong comebacks to the previous argument and a banter is created as a result. The constant barrage of conflicting stances is certainly on some levels included to make the audience laugh. ...read more.

This speech shows how Aristophanes dislikes those who oppose his views. He is targeting the unworthy hoarders and anyone else who disagrees with him. While what we have seen previously indicates that more often than not the comedy is used to produce a serious message, the final scene discredits this implication. The play ends with all the characters forgetting their troubles and their differences and dancing merrily for no apparent reason. In my view this final act is used to lift the heavy atmosphere generated by previous scenes. While the play may have serious morals behind it, Aristophanes' ultimately wanted this play to be remembered as a comedy. In conclusion it is clear that Aristophanes' wanted to create humour from his creation, however he also wanted to provoke serious thoughts amongst his audience. In my opinion the overall idea of the play is to single out certain people and groups and hold them to account for their actions. This aspect appears more important than simply making the audience laugh, however the humour is essential in putting across his message. As a writer of comedies humour is integral in upholding his reputation, but in order to sustain his self imposed status as one who will stand up to injustice he also requires the input of serious moral communication. ...read more.