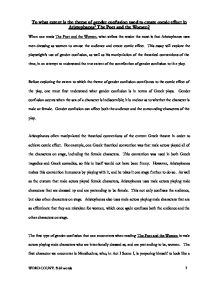 To what extent is the theme of gender confusion used to create comic effect in Aristophanes' The Poet and the Women?

[16], or "...that chap with the long bushy beard..."[17]). Although this may not seem humorous to the audience at first, when Agathon is wheeled out later onto the stage, dressed half in male clothing and half in female clothing and singing with the chorus in an extravagant, feminine voice, the contrast of a very masculine, strong man with an effeminate character brings out the humour of the situation, creating the desired comic effect.. As well as this, throughout the rest of this first scene, the reader continues to find Agathon being described as a somewhat effeminate character, rather than a male character, as one would expect. When Agathon implores as to why Euripides refuses to attend the Thesmophoria festival in person, he states: "...I'm old and white-haired and bearded; whereas you are good-looking, fresh-complexioned, clean-shaven, you have a woman's voice and a dainty manner, you'd be quite pretty to look at." [18], implying the extent to which Agathon seems to be a woman. Although put quite bluntly, the contrast between these two extremely opposite and different characters adds humour to the scene, and to the play. Humour is also created in relation to Agathon's femininity when he describes to Euripides and Mnesilochus about his attitude to the composition of his works, as well as the attitudes of real women in relation to him. After Mnesilochus' comment as to Agathon's masculine/feminine appearance, Agathon defends his clothing by describing the motivation behind his dress: AGAT..: ... I wear my clothes to suit my inspiration. A dramatic writer has to merge his whole personality into what he is describing. If he is describing a woman's actions, he has to participate in her experience, body and soul. ... If he's writing about a man, he's got all the bits and pieces already, as it were; but what nature hasn't provided, art can imitate. [19] The audience would find this humorous because, as he has said himself, Agathon is a dramatic writer; the audience, therefore, would have expected him to be a somewhat solemn figure, looking - and indeed dressing - normally. ...read more.

in the play; for example, even when Mnesilochus is dressed as a woman at the Thesmophoria festival, Aristophanes refers to him grammatically in the feminine form, up until the discovery of his true sex, whereupon he is referred to in the original Greek using the masculine form. The audience is left bewildered, not only by the lack of clarity over Mnesilochus' appearance, but also by the changeover in the grammatical gender, which adds humour to the situation. Another example of this grammatical gender confusion comes later in Act II, when Euripides arrives on scene in his first attempt to rescue Mnesilochus from captivity. In the original Greek, Mnesilochus (here playing Helen) refers to himself, and Euripides (or Menelaus) refers to Mnesilochus, using the feminine form; the Third Woman, however, in her confusion over Mnesilochus' real identity, continues to refer to Mnesilochus in the masculine form. This not only confuses characters such as the Third Woman, but also the audience, who may be left confused over Mnesilochus' real gender, which adds comedy to the scene. This grammatical gender continues throughout the rest of the play. Another example of this is when the Scythian officer enters with Mnesilochus. Despite being the only character in the entirety of the play who does not display any sort of gender confusion in any physical form, the Scythian succumbs to uttering a series of grammatical gender mix-ups in the original Greek during Euripides and Mnesilochus' parody of the Andromeda. Although he seems to himself to be able to distinguish between Mnesilochus' actions as a man (as himself) and his actions as a woman (as Andromeda), the original Greek shows the Scythian combining the masculine and the feminine forms when describing Mnesilochus. Not only does this amplify the Scythian's supposed confusion, but it also confuses the Greek audience, who may wonder whether the Scythian actually believes Mnesilochus and Euripides' masquerade. In conclusion, Aristophanes uses gender confusion to great success in the play The Poet and the Women to create comic effect. ...read more.