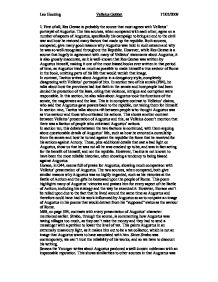 1. First of all, Res Gestae is probably the source that most agrees with Velleius' portrayal of Augustus. The two sources, when compared with each other, agree on a number of aspects of Augustus, specifically his campaign to bring an end to the civil war and how he restored many factors that made up the republic. Both sources, compared, give many good reasons why Augustus was held in such esteem and why he was so well-recognised throughout the Republic. However, while Res Gestae is a source that hugely in agreement with many of Velleius' statements about Augustus, it is also grossly inaccurate, as it is well-known that Res Gestae was written by Augustus himself, making it one of the most biased books ever written in that period of time, as Augustus tried as much as possible to make himself a true saviour of Rome in the book, omitting parts of his life that would tarnish that image. In contrast, Tacitus writes about Augustus in a derogatory style, completely disagreeing with Velleius' portrayal of him. In section two of his annals (P84), he talks about how the provinces had lost faith in the senate and how people had been denied the protection of the laws, citing that violence, intrigue and corruption were responsible. ...read more.

However, Horace can't be relied upon due to the fact that he lived around the same time as Augustus and therefore could have had his work influenced by Augustus so as to not paint an image of Augustus in his poems that would detract from his "supposed" status as the saviour of Rome. M68, on page 304, contrasts with every presentation of Augustus' character mentioned earlier. Strabo, through the source, is commenting how Augustus was taxing villages too much, as they can't raise the money and they had to send a messenger with a petition to lower the level of tax. This paints Augustus in an extremely unsavoury light, as it makes him out to be a tax collector, which is not an image that Augustus wants to have associated with him. Since Strabo was contemporary, we can't trust the reliability of his works, and so we have to discount his writing. Seneca the Younger writes about Augustus pardoned a well-known nobleman with an impeccable reputation. This shows similarities to other sources in that Augustus was known for being lenient against wrong-doers. ...read more.

Another problem with his style of writing is that it does not contain facts but mostly opinion about people, whether they are good or bad in his eyes. This leads to the fact that his writing is largely considered as being too biased and therefore useless when writing factual information about leading members of state. It appears that he writes about Augustus, or people connected with Augustus, whether they were waging a war on his behalf or acting in the senate on his behalf, in a most complementary light, shedding heaps of praise upon them and reserving his dislike for those who would work and plot against Augustus' wishes. In conclusion, Velleius' work is strongly influenced by his patriotism and his fondness for Augustus, Tiberius and anyone who carries out either of their wishes. This creates many problems, both for other historians and for people acting against Augustus and Tiberius, or anyone carrying out their orders; the former because they can't rely upon his information as being correct, and the latter because they will have their reputation tarnished forever if Velleius writes disparaging comments about them and their actions. ?? ?? ?? ?? Leo Hocking Velleius Gobbet 17/02/2009 ...read more.