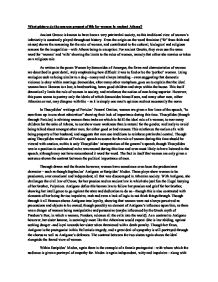 Ancient Greece is known to have been a very patriarchal society, as this traditional view of women’s inferiority is constantly played throughout history.  Even the origin on the word feminine (“fe” from faith and minus) shows the reasoning for the role of women, and contributed to the cultural, biological and religious reasons for the inequalities – with Athens being to exception. For ancient Greeks, they even use the same word for ‘woman’ and ‘wife’ showing the limits to the roles of women, namely that either she marries or takes on a religious role.

As written in the poem Women by Semonides of Amorgos, the flaws and characteristics of women are described in great detail, truly emphasising how difficult it was to find or be the ‘perfect’ woman. Using analogies such as being similar to a dog – nosey and always intruding – even suggesting that domestic violence is okay within marriage. Semonides, after many other metaphors, goes on to explain that the ideal woman has a likeness to a bee; is hardworking, bears good children and stays within the house. This itself dramatically limits the role of women in society, and reinforces the notion of men being superior. However, this poem seems to portray only the ideals of which Semonides himself sees, and many other men, either Athenian or not, may disagree with this – as it is simply one man’s opinion and not necessarily the norm.

In Thucydides’ writings of Pericles’ Funeral Oration, women are given a few lines of the speech, “to sum them up in one short admiration” showing their lack of importance during this time. Thucydides (though through Pericles) is advising women three tasks on which to fulfil the ideal role of a women; to rear many children for the sake of Athens, to not show more weakness than is natural for the gender, and lastly to avoid being talked about amongst other men, for either good or bad reasons. This reinforces the notion of a wife being property of her husband, and suggests that men use traditions to reinforce patriarchal control. Though using Thucydides rendition of Pericles’ speech as source for the role of women during this time should be viewed with caution, as this is only Thucydides’ interpretation of the general’s speech, though Thucydides was in a position to understand as he was around during this time and even most likely to have listened to the speech, although may not have remembered it word for word. The fact in itself that women are only given a sentence shows the contrast between the political importance of men.

Through drama and the theatre however, women have sometimes even been the predominant character – such as though Sophocles’ Antigone or Euripides’ Medea. These plays show women to be passionate, over emotional and independent; all that was discouraged in Athenian society. With Antigone, she challenges the civil law of Creon, for her passion and an ancient law in which she justifies the illegal burying of her brother, Polynices. Antigone defies this human law to follow her passion and grief for her brother, showing her intelligence to go against the state and dedication to do so – though this is also contrasted with elements of her being far too impulsive, rash and even a lack of logic to not think things through. Though through it all Haemon shows Antigone true loyalty, showing that women were not always perceived as processions and objects to be owned, though possibly an element of Antigone’s influence upon him, as there was a danger of women being manipulative and persuasive (maybe influenced by the Greek myth of Pandora’s Box, in which a woman, Pandora, releases all the evils into the world). As a contrast to Antigone however, her sister Ismene, is seemingly more like the Athenians would expect. She is law abiding, against seeking danger –and loyal towards her sister when threatened with a death penalty. Though her flaws, Antigone is the protagonist in this Hellenistic tragedy, and a great deal of sympathy is still portrayed through the chorus as well as Antigone’s defences. The contrast between the two sisters again shows the ideal alongside the feared view of women.

Within Euripides’ Medea, again there is the example of a female protagonist – with whom which the audience is given a portrayal of empathy for. Medea is again independent, witty and impulsive – along with over emotional; in the plays creating a lethal combination. Medea is left alone, after giving everything up for Jason, and an emphasis on the vulnerability of a divorced women – with no rights, or as Medea sees it, no options but revenge (as there is no other outlet for her talents). The contrast is played between Jason’s ambition, and lack of loyalty to his wife, and Medea’s hatred born from her love of Jason, suggesting that women were even seen more as possessions (as Creon’s daughter is also used for a political marriage). These tragedies were written in order to entertain and shock the citizens of Athens, so although these plays may reflect contemporary issues and concerns there may also be the use of exaggeration and deliberate unheard of events in society

Aristophanes’ Lysistrata shows a comic and ironic portrayal of a solution to the Peloponnesian War. The play is using women to reflect the shortcoming of Athenian politicians, as it was written in 411 BC well into the war. Also emphasized in the plot is the lack of rights and influence in foreign policy women had, as all they could do was withhold sex from the men as a means of protest, highlighting the restrictive role of women. Though Aristophanes was known to be against the war, he may have simply used this play to emphasize to the audience and politicians that they are doing wrong, and not thinking in the correct manner, as in the play, even women could see the war was pointless.

As a contrast to these tragic plays, in Plato’s dialogue, Laws, the fear of women is subtly portrayed – but the freedom allowed of women, “quite wrongly the women have been left to their own devices uncontrolled by law” showing the need for women to be contained in some way. Perhaps the tragedies compliment and further enforce this fear – that women should be protected from society. Plato also argues an engrained sexist view – that women do not have the same capability to show virtue than a man. Plato is a known figure in Athens, and a contemporary of the time, as well as educated. This means he is in a position to know and understand what was happening at this time, though this source is obviously based on opinion.

However, through all of this, scholiast Lucian (Dialogue Meretricii) explains the festival of Thesmorphoria – in honour of the goddess Demeter and her daughter Persephone, and the celebrations involve mostly women. There is not an extensive amount of evidence for this festival, as only women were really allowed to attend, and it was rare that they wrote anything down during this time, but the festival itself was also parodied by the poet and playwright Aristophanes, in his Themsophoriazusae. This play by Aristophanes also shows the women of the chorus, speaking in the Parabasis, explaining that if a women gives birth to a good man, who benefits the city, she should be respected and get a certain degree of honour, whereas those who do not bear good children should be punished. Using Aristophanes as a source however, should be evaluated with caution, as only loose interpretations as situations may be exaggerated or changed for comic effect – though the situation mustn’t be too out of reach for the audience, and they must understand the circumstances.

Ultimately, women in Athens were known to have a much less prominent role in society than men, namely due to the influence of the men, and what the women were perceived as. Women also could be seen as offering less to society, and this is even possibly reflected through statistical evidence, such as the census figures suggesting that 10% of female babies were abandoned by their families, even left to die. Women did not seem to have much choice is society, as being controlled by father, then by husband seemed to be the norm, with the exception of religious roles and festivals. Women were not completely ignored in society however, as even the patron god of Athens is the goddess Athena, representing wisdom and courage.