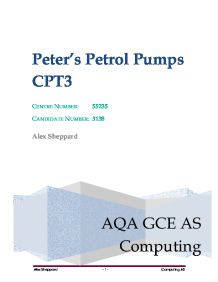 They appear on the same form that has been split in 2. The pump is automatically shown and the console is hidden. MAIN FORM- CONSOLE UNLOCKED The console cannot be used without clicking the Activate Console button and entering the password to make the console visible. Then Peter can use the controls on the console that perform administrative tasks, such as changing the price per litre and viewing the daily totals. LOGIN DIALOG The login dialog is a simple form where the password to show the console can be entered. The characters entered are hidden with the '*' symbol for security. When OK is pressed, the entered password is compared with the correct password and if they are the same the console is unlocked. Otherwise the console remains hidden. PRICE PER LITRE DIALOG This form has a similar layout to the login dialog. It allows Peter to enter a new price per litre in the format shown and when OK is pressed LITRES SOLD From the console, Peter can see the number of litres sold during the last day, in the form of a message box. TOTAL TAKINGS From the console, Peter can see the amount of money taken during the last day, in the form of a message box. ...read more.