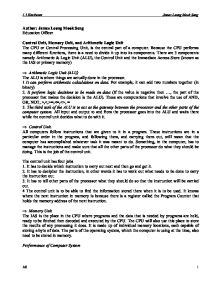 Control Unit, Memory Unit, and Arithmetic Logic Unit. The CPU or Central Processing Unit, is the central part of a computer.

Author: James Leong Mook Seng Education Officer Control Unit, Memory Unit, and Arithmetic Logic Unit The CPU or Central Processing Unit, is the central part of a computer. Because the CPU performs many different functions, there is a need to divide it up into its components. There are 3 components namely Arithmetic & Logic Unit (ALU), the Control Unit and the Immediate Access Store (known as the IAS or primary memory) ==> Arithmetic Logic Unit (ALU) The ALU is where things are actually done in the processor. 1 It can perform arithmetic calculations on data. For example, it can add two numbers together (in binary) 2. It perform logic decisions to be made on data (If the value is negative then ..., the part of the processor that makes the decision is the ALU). These are computations that involve the use of AND, OR, NOT, >,<,>=,<=,<>, = 3. The third task of the ALU is to act as the gateway between the processor and the other parts of the computer system. All input and output to and from the processor goes into the ALU and waits there while the control unit decides what to do with it. ==> Control Unit. All computers follow instructions that are given to it in a program. These instructions are in a particular order in the program, and following them, and carrying them out, will mean that the computer has accomplished whatever task it was meant to do. Something, in the computer, has to manage the instructions and make sure that all the other parts of the processor do what they should be doing. This is the job of the control unit. The control unit has four jobs 1. It has to decide which instruction to carry out next and then go and get it. 2. It has to decipher the instruction, in other words it has to work out what needs to be done to carry the instruction out. ...read more.

a printer or a keyboard. Common Peripheral Devices Any hardware device that is part of the computer system but is not part of the processor itself, is called a peripheral device. Peripheral devices can be categorised under four headings. 1. Communication devices. These devices allow for communication between machines and will be covered in detail in 'Data Transmission and Networking' 2. Storage devices. These devices, which provide for secondary storage in a computer system, have been described above. 3. Input devices. a) Keyboard. A standard keyboard uses keys that stand for the different characters that the computer recognises in its character set. Most keyboards contain the letters of the alphabet, but not all do, for instance most calculator keyboards are very different, as are the keyboards for use at ATM machines. The characters needed for specialist use machines are determined by the use to which the machine is to be put. Keyboards are the most common form of input device to a system because they are universally available and understood. The common keyboard is known as the QWERTY keyboard because those are the first six characters on the top line. The design is not very good for two reasons. (1) The arrangement of characters comes from the original typewriter whose keyboard was arranged to be the most difficult to use in order to slow typists down so that they did not jam the mechanism of the old machines. (2) The keyboard itself is difficult to use comfortably because of the way that the keys are arranged in rigid rows, making it awkward to keep your arms comfortable while using it. The first problem is very difficult to solve because of all the experienced operators that can use the present keyboard so well. Retraining them to use a different arrangement of keys would not be feasible. Various attempts have been made to address the second problem by arranging the keys in curves that fit the palm of the hand rather than in straight lines. ...read more.

However, if the two answers are mixed together then it produces a confused, and often, wrong, answer. This is why the first statement is important as it has set the parameters by which the question will be answered. You don't have to say this in your answer, but it makes clear what is being done. Also, there are more mark points than there are marks available. Hopefully, you are getting used to this because it is generally true in most questions. In this question there are obviously two points for interrupts and two for buffers, but in order to get the marks you must make sure that the definition appears somewhere. So, for the interrupt, you need to earn the last mark point, otherwise you haven't defined what an interrupt is. 5 A. Input: -Touchscreen -Some protection against vandalism/restricts user access to contents of menu system displayed/simple to use because it uses human reaction of pointing so no training necessary Output: -(Touchscreen)/printer -Touchscreen outputs choices for user to select from/printer available for producing hardcopy as a permanent record for the customer Storage: -Hard drive/CDROM -Hard drive necessary to store details of the products on sale because of the large number of changes that occur in this file. CDROM used to keep the store plan and the location of the departments as these do not change. Notice the large number of possible mark points. Also the way that the marks are split up. In this type of question you can't expect a lot of marks for simply writing down a long list of peripheral devices, the marks are split up according to the four types of peripheral mentioned in section 1.5.e. In reality, this question would probably have talked about such systems being available throughout the store, but this would mean that they would be able to communicate with one another. As communication comes in the next section it was left out of this example question, but such a question would normally have 8 marks, 2 marks for each of the types of peripheral. 1.5 Hardware James Leong Mook Seng 1 AS ...read more.