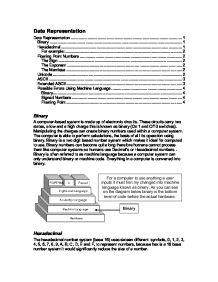 Data Representation Data Representation 1 Binary 1 Hexadecimal 1 For example: 2 Floating Point Numbers 3 The Sign 3 The Exponent 3 The Mantissa 3 Unicode 3 ASCII 3 Extended ASCII 3 Possible Errors Using Machine Language 4 Binary 4 Signed Numbers 4 Floating Point 4 Binary A computer-based system is made up of electronic circuits. These circuits carry two states, a low and a high charge this is known as binary (On 1 and Off 0 switches). Manipulating the charges can create binary numbers used within a computer system. The computer is able to perform calculations, the basis of all its operation using binary. Binary is a two digit based number system which makes it ideal for computed to use. Binary numbers can become quite long therefore humans cannot process them like computer systems so humans use Decimal's or Hexadecimal numbers. Binary is often referred to as machine language because a computer system can only understand binary or machine code. Everything in a computer is converted into binary. ...read more.

Floating Point Numbers The floating point binary storage formats used my Intel processors were standardized by the IEEE organisation. IEEE 32 bit and 64 bit. "Floating Point" refers to the decimal point. Since there can be any number of digits before and after the decimal, the point "floats". The floating-point unit performs arithmetic operations on decimal numbers. This is and example of a shorter 32 bit number. It is a three-part representation of a number that contains a decimal point. The Sign A single bit represents the sign of a binary floating-point number. A 1 bit indicates a negative number, and a 0 bit indicates a positive number. The Exponent This indicates the number of time the number is multiplied by itself. The Mantissa This is the positive fractional part of the representation of a logarithm; in the expression log 643 = 2.808 the mantissa is .808. This represents where the decimal point is. Unicode Unicode is an international character set developed for the scripts of all the languages of the world. ...read more.

The extended ASCII character set uses 8 bits, which gives it an additional 128 characters. The extra characters represent characters from foreign languages and special symbols for drawing pictures. Possible Errors Using Machine Language Binary Misinterpretation can problem when using binary. Numbers can become too long for humans to understand as binary is only a two base number system. This is why humans prefer to use a decimal number system. 16Bit and 32Bit binary can lead to problems if mixed together in a computers registry. If a 16Bit binary number was fed in to a 32Bit registry system the expected output will be different which could lead to many other calculation errors. Signed Numbers The representation of signed numbers presents more problems. Signed numbers have small number limits from -127 to +127. If a computer expects a signed number but and a normal binary number is inputted the overall outcome could be different than expected. Floating Point Floating Point number systems have different standards. The main standard is intel's IEEE floating point system. There are also other standards of floating point used with other processors. This can lead to confusion with storage if you change conversion methods. ...read more.