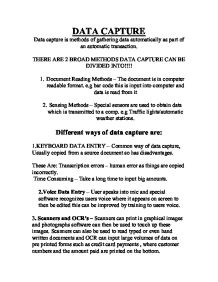 DATA CAPTURE Data capture is methods of gathering data automatically as part of an automatic transaction. THERE ARE 2 BROAD METHODS DATA CAPTURE CAN BE DIVIDED INTO!!!! 1. Document Reading Methods - The document is in computer readable format. e.g bar code this is input into computer and data is read from it 2. Sensing Methods - Special sensors are used to obtain data which is transmitted to a comp. e.g Traffic lights/automatic weather stations. Different ways of data capture are: 1.KEYBOARD DATA ENTRY - Common way of data capture, Usually copied from a source document so has disadvantages. These Are: Transcription errors - human error as things are copied incorrectly. Time Consuming - Take a long time to input big amounts. 2.Voice Data Entry - User speaks into mic and special software recognizes users voice where it appears on screen to then be edited this can be improved by training to users voice. 3. Scanners and OCR's - Scanners can print in graphical images and photographs software can then be used to touch up these images. Scanners can also be used to read typed or even hand written documents and OCR can input large volumes of data on pre printed forms such as credit card payments , where customer numbers and the amount paid are printed on the bottom. 4.Key to Disk Systems - In places where large amounts of data on forms which then have to be keyed in for later processing. An entire comp system consisting of processor, dozens of terminals and a central disk storage maybe dedicated to data entry. When the batch of data has been entered and stored on disk, the sources documents are passed to a second data entry operator who switches his machine to verify mode and keys in the data a second time. The keystrokes are compared with the original and any discrepancies are highlighted so it can be checked for errors. ...read more.

*SYSTEMS TESTING - Testing it can handle the volumes anticipated. *USER ACCEPTANCE - Tested with user to check its suitable. Testing strategy should be prepared after the design of the system with prepared data to use. The testing should cover errenous/extreme data. The data must also be checked that it follows the system correctly. As software becomes more complex it becomes more difficult to test. With GUI interfaces and online systems, Full effective tesing is impossible. It is impossible to recreate the conditions on under which a program crashed. THESE DIFFICULTIES ARISE BECAUSE: *There is no single, well defined flow of events at the user interface. *It is often impossible to restore a database to the condition it was in before a bug was detected. *Rapid, Iterative and continuous development techniques mean that software continues to develop and new, weekly versions of software are released by programmes. Testing simply cannot keep pace with the rapid changes. *Users often use new software in ways which were not anticipated by software engineers who wrote the system. When the system finally crashes it is impossible to retrace the sequence of events which caused the crash. *Performance testing is difficult to step up. An online, multi user system that works well when tested with 1000 records and 2 users may not work when a million records and hundreds of users are simultaneously accessing the database. CRITERIA FOR SELECTING A SOFTWARE PACKAGE!!! Most important factor is how well it meets your needs others are: * Compatability with existing hardware. Will software run on existing equipment? * Compatability with existing software. Can files form other packages be imported/exported to an from new and other packages. * Quality of documentation. * Ease of learning. How good is online help. Are tutorials available? * Ease of use. Is it user friendly? Are there shortcuts for advanced users? * Technical support. Is it available? ...read more.

the method by which user tells the computer what to do, and response it makes. THE IMPORTANCE OF A GOOD HCI A good interface can help to ensure users carryout there tasks: * Safety e.g flying a jumbo jet pilot interacting with the console * Effectively e.g. Users do not find they have videoed Bulgarian clog dancing instead of the FA cup final. * Efficiently e.g users do not want to spend 5 mins trying to find correct way to insert their cashcard and type in pin number and the amount of cash they want and then leave without extracting there card * Enjoyably e.g. a primary school pupil using a program to teach multiplication tables. Well designed systems can improve the output of employees, improve the quality of life and make the world a safer more enjoyable place to live. Interface Styles There are a number of common interface systems including: * Command line interface * Menus * Natural Language * Forms and dialogue boxes * Graphical user interface GUI) The Wimp Interface * Windows * Icon * Menus * Pointer Benefits of GUI * Icons are easily understood and remembered * Visual navigation to directory/folder structure Disadvantages of command * Difficult to remember commands * Must get the correct syntax (spelling and order of commands) for the commands Advantages of a common user interface All the software packages (Office suite) which you use are common user interface and have a similar look and feel, So that a user can become familiar with one package and can quicly learn a second. Example in each package a single click on the mouse button selects a button and a double activates it. In each package the methods for opening, closing, sizing and moving windows is identical. The advantages are: * Increased speed of learning * Ease of use * Confidence building for novice users * Increase range of tasks solvable by experienced users * Greater range of software to assemble to the average user. ...read more.