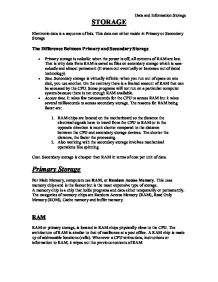 STORAGE Electronic data is a sequence of bits. This data can either reside in Primary or Secondary Storage The Difference Between Primary and Secondary Storage * Primary storage is volatile: when the power is off, all contents of RAM are lost. That is why data from RAM is saved as files on secondary storage which is non-volatile and almost permanent (It wears out eventually or becomes out of dated technology) * Size. Secondary storage is virtually infinite: when you run out of space on one disk, you use another. On the contrary there is a limited amount of RAM that can be accessed by the CPU. Some programs will not run on a particular computer system because there is not enough RAM available. * Access time. It takes few nanoseconds for the CPU to access RAM but it takes several milliseconds to access secondary storage. The reasons for RAM being faster are: 1. RAM chips are located on the motherboard so the distance the electrical signals have to travel from the CPU to RAM or in the opposite direction is much shorter compared to the distance between the CPU and secondary storage devices. The shorter the distance, the faster the processing. 2. Also working with the secondary storage involves mechanical operations like spinning Cost. Secondary storage is cheaper than RAM in terms of cost per unit of data. Primary Storage For Main Memory, computers use RAM, or Random Access Memory. This uses memory chips and is the fastest but is the most expensive type of storage. ...read more.

You would need to store it on some form of backing store (eg floppy disk) before the power is switched off. The document will stay on the disk so that you can load it into memory and carry on with it next lesson. * Computer memory is often not large enough to store large data files. The data would be stored on backing storage and loaded into memory a small amount at a time as required. The school database of pupil's grades and reports is approximately 80 million bytes of information. The memory in your computer is approximately 4 million bytes. You could not load the whole database into memory. Points to note ? A storage medium is the material on which the data is stored eg magnetic tape, floppy disk, CD etc. ? A storage device is the piece of equipment, which uses the storage medium. e.g. Floppy disk drive, hard drive, tape unit, CD drive.... ? The amount of data that can be stored on a disk or tape is measured in the same way as the size of memory - using bytes. ? One byte is the amount of storage needed to store one character. So, for example to store the word CUCUMBER would need 8 bytes. Magnetic Disks Magnetic disks are the most common form of backing storage for all sizes of computers. A typical magnetic disk has two surfaces although sometimes disk packs on mainframe computers are made up of a number of disks). ...read more.

Conventional tape comes in reels up to 4600 feet long. Magnetic tapes stored in racks. Tape is also available in cartridges. Tape cartridges are frequently used for backing up hard disks on microcomputers. Tape streamers can be scheduled to make backups at night. Advantages of Hard Disk over Floppy Disk * Storage capacity is significantly greater. * Hard disk allows faster access to data than floppy disks because a hard disk spins several times faster. Disadvantages of Hard Disk over Floppy Disk * Head crash can occur. Ahead crash happens when the surface of the read/write head or particles on its surface come into contact with the disk surface causing the loss of some or all the data on the disk. * Unlike a floppy, the hard disk cannot be easily moved from place to place without much complication. Advantages of Optical Disks * It is much more sturdier. It is physically hard to break or melt or warp. * It is not sensitive to being touched, though it can get dirty or scratched. * It is entirely unaffected by magnetic fields. Disadvantages of Optical Disks * Optical disk technology is costly but prices are falling. * It is not easy to copy an optical disk. Advantages of Magnetic Tape Storage * Inexpensive, reusable and easy to handle. * High data density, making it easy to access data fast. * Variable record length. Disadvantages of Magnetic Tape Storage * Only sequential access. * Cannot be read by humans * Vulnerable to dust, heat, and humidity. ?? ?? ?? ?? Data and Information Storage ...read more.