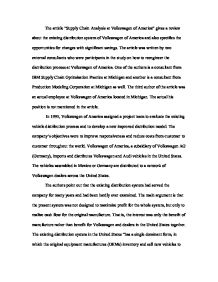 Review of the article &quot;Supply Chain Analysis at Volkswagen of America&quot;.

The authors brakes the total cost into three components: the cost from plant to processing center, the cost from processing center to distribution center, and the cost from distribution center to market area. In addition, they added inventory holding costs as a finance charges to the total distribution cost. So, no doubt that the number and locations of processing and distribution centers are the major factors affecting customer service and distribution cost. In this scenario, Volkswagen of America considered two types of facilities. The first type facility was smaller in capacity and cheaper, and the second type facilities were larger and the increase in operating expenses was nonlinear, so that they could offer economies of scale. First of all, the study group developed location scenarios to specify the number and locations of DC's and processing centers. They also specified the market areas covered by each DC and processing center. In this scenario, totaling of the performance measures required consideration of the "dynamic and stochastic elements in the system." As the authors explain dynamic elements included inventory control policies and demand seasonality over the year, while customer demand, customer choice and transportation delays represented stochastic elements. They used a simulation model to consider both elements. The model included the customer and vehicle cycles to calculate performance measures. ...read more.

The new strategy was not accepted universally. For example, southeastern dealers saw the reduction in inventory as a potential loss in competitive advantage. In 1998, after introducing a number of new models to the US market, the pilot DC's were not able to maintain the required stock level, because of the very high demand. So, in 1999, the pilot program was withdrawed. The optimization tools presented potential opportunities to improve supply-chain by focusing on system level optimization rather than just local. Even though "the pilot test was ended, the learning from the simulation and testing had not been lost." Most importantly, Volkswagen realized that supply-chain must be viewed from the system level. The existing system focusing on cash-flow could only minimize total system profitability and customer service. The article "Supply Chain Analysis at Volkswagen of America" is very well written and self- explanatory. It is very easy to read and to understand how model is created and how it works. The advantage is that you do not need to be majoring in supply chain techniques in order to get the main idea. Personally, I really liked the article. I found it very useful and as mentioned above very easy to read and understand. The authors did a great job in portraying the existing supply chain with its disadvantages. They showed good reasons for improvements and necessity for change. ...read more.