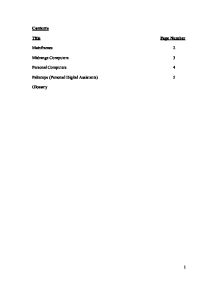 Contents Title Page Number Mainframes 2 Midrange Computers 3 Personal Computers 4 Palmtops (Personal Digital Assistants) 5 Glossary Information Technology Coursework Mainframes Mainframes have been around for decades. They were the first systems to power businesses. They often took up extremely large spaces, were expensive to buy and required large amount of power and effort, using water-cooling or air conditioning systems to keep them at optimum temperature. Mainframes are multi-user systems. They allow many users, from hundreds to thousands to work at the same time on different tasks. Mainframes use the CISC instruction set. This stands for Complex Instruction Set Computer. It uses 18 different instruction formats, with system instructions being of variable length, 16bits, 32bits and 48bits. The instructions run directly between memory and the registers, and internally within the registers and the memory. Originally the x86 was had 64kb of RAM which was expandable to 640kb. As there was no hard-drive, data was stored on tapes or 340kb floppy discs. The CPU supported 16bit processing with the use of 16bit registers and 16bit data buses which were internal. Technology has progressed to the point where 64Gigabytes of Physical memory can be used today instead of the 1MB used previously. The processors architecture has also changed. They have expanded in size from a 32bit to a 64bit which means the CPU can now carry out larger data instructions. The Registers have also been upgraded since the x68 was first made available to businesses. ...read more.

This allows Supervisor access and regular user access to be able to use different functions. This allows security and protection for the system. They are extremely efficient, fast and require less maintenance than Mainframes. They are also able to provide management of networks of PC's and terminals. The disadvantage is that they are not as powerful as mainframes, which means a lot of companies are not interested in them. Personal Computers Personal Computers have overtaken the market with a storm over the past decade to the point where millions of homes have them all over the Globe. They are single user machines with the ability to be networked with other PC's. They currently run with a CPU speed of up to 3 GHz, which are made by the industry spear headers AMD and Pentium. The have an average RAM holding of 256 DDR RAM (Double Data Rate) and a typical Hard Drive space of 60GB. They also contain Cache Memory. This is a storage space that holds data to keep up to speed with the Processor speed. Typical PC registers consist of eight 80bit floating point registers as well as General Purpose registers, in which addresses and data are held. MMX (Multi Media Extension) and SIMD (Single Instruction Multiple Data) was then created by Pentium. This included new Microprocessor instructions to carry out larger instructions involving video, audio and graphical data, as well as being able to use one instruction to perform the same instruction on multiple data items. ...read more.

Glossary CISC (Complex Instruction Set Computer) Computer designed with a full set of instructions that are intended to provide needed capabilities in the most efficient way. RISC (Reduced Instruction Set Computer) RISC enables the microprocessor to run a reduced set of instructions. RISC allows processing at a much higher speed. Static RAM SRAM (static RAM) is random access memory (RAM) that retains data bits in its memory as long as power is being supplied. Flash Memory Flash memory is a constantly powered type of memory that can be erased and reprogrammed in units of memory called blocks. Flash Memory is very popular in Digital Cameras and PDA's to add extra storage capabilities. MMX (Multi Media Extension) MMX adds new Microprocessor instructions to deal with Media such as Video, Audio and Graphics. Allows MMX enabled Processors to run up to 60% more quickly. SIMD (Single Instruction Multiple Data) One of the three performance enhancements of MMX, SIMD lets one instruction within the microprocessor operate at the same time on multiple data items. This is especially productive for applications involving Media such as Video and Audio. FICON (Fiber Connectivity) FICON is a high-speed input/output interface for mainframe computer connections to storage devices. FICON channels increase input/output capacity through the combination of a new architecture and faster physical link rates. ESCON (Enterprise Systems Connection) ESCON is a marketing name for a set of IBM and vendor products that interconnect S/390 computers with each other and with attached storage, attach local workstations with optical fibre technology. 1 ...read more.