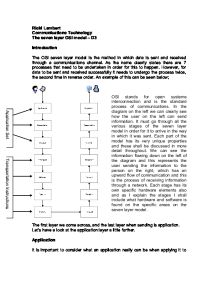 Ricki Lambert Communications Technology The seven layer OSI model - D3 Introduction The OSI seven layer model is the method in which data is sent and received through a communications channel. As the name clearly states there are 7 processes that need to be undertaken in order for this to happen. However, for data to be sent and received successfully it needs to undergo the process twice, the second time in reverse order. An example of this can be seen below; The first layer we come across, and the last layer when sending is application. Let's have a look at the application layer a little further. Application It is important to consider what an application really can be when applying it to computing. Application is a software program designed to perform a specific task or group of tasks, such as word processing, communications, or database management. In the case of communication we have many applications, such as messenger software (yahoo or msn), chat rooms, most prominent though is the e-mail based software used on a daily basis by almost every internet user. An application of this type maybe outlook express, or a standard web based e-mail account. Application is considered very basic and is something which is visible to the user. ...read more.

This makes up a huge part of the transportation process however differing protocols to TCP can be used. TCP/IP is one of the most common procedures in computing communications and plays a big part in transportation. This goes to show the relationship between the network layer and the transport layer. The network layer is the IP and the TCP is part of the transport layer. There are many specific ways in which the transportation layer of the model works and these shall be listed below; * Segmentation, packaging and reassembling - This process is very similar to what occurs in the memory management sub system of an operating system. Large amounts of data are segmented into smaller pieces on the source machine and are then sent, this is then reassembled on the destination machine. * Flow control - This is implemented to ensure that time differences between sender and receiver are dealt with and corrected appropriately. Network The network layer is where a router will reside and is the area in which differing protocols reside. It is possible to think of the network layer of doing the following task; if two differing networks are involved in communicating then certain pathways need to be followed, ultimately this is the routers job but it co-insides with the network layer. ...read more.

This happens for both sending and receiving and also occurs in wireless networking. The devices such as the routers, hubs and modems are the ones responsible for possessing the data. They don't intend on knowing any of the message being sent they are just interested in the raw data, although instead of viewing this as a 0 or a 1 they see it as a light pulse or electric charge. The two layers, physical and data link are so closely related that it is impossible to define hardware that belong to one or the other. What is tending to happen nowadays is that the physical layer is being divided in to sub categories so that different network Medias can be supported by the same technology, this allows them to increase in performance and why we have seen the following, Ethernet, Fast Ethernet and 10-Gigabit Ethernet. Conclusion In concluding it is important to remember that all stages of the seven layer model are equally important even if some functions overlap. They are vital in the way in which we communicate and are always developing to suit new technologies and hardware. Another thing to consider is the actual definition of the seven layers. This is not true as really the system is an eight layer concept where the eighth layer is actually the network engineer or user. In some cases the eighth layer is used to define the way in which the system is protected so it represents the security features. ...read more.