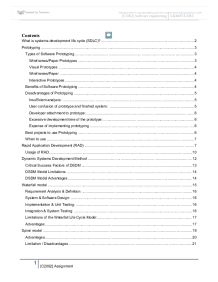 The systems development life cycle (SDLC) is a conceptual model used in project management that describes the stages involved in an information system development project.

Contents What is systems development life cycle (SDLC)? 2 Prototyping 3 Types of Software Prototyping 3 Wireframes/Paper Prototypes 3 Visual Prototypes 4 Wireframes/Paper 4 Interactive Prototypes 4 Benefits of Software Prototyping 4 Disadvantages of Prototyping 5 Insufficient analysis: 5 User confusion of prototype and finished system: 5 Developer attachment to prototype: 6 Excessive development time of the prototype: 6 Expense of implementing prototyping 6 Best projects to use Prototyping 6 When to use 7 Rapid Application Development (RAD) 7 Usage of RAD 10 Dynamic Systems Development Method 12 Critical Success Factors of DSDM 13 DSDM Model Limitations 14 DSDM Model Advantages 14 Waterfall model 15 Requirement Analysis & Definition: 16 System & Software Design: 16 Implementation & Unit Testing: 16 Integration & System Testing: 16 Limitations of the Waterfall Life Cycle Model 17 Advantages 17 Spiral model 18 Advantages 19 Limitation / Disadvantages 19 What is systems development life cycle (SDLC)? The systems development life cycle (SDLC) is a conceptual model used in project management that describes the stages involved in an information system development project. Even though the system is small, it is better to have a proper system development plan, not only because it helps to save the time and the money, but also because it has a proper management and execution of plans and features of the system are well documented. So when regarding a complicated system, to have a system development plan is really effective. SDLC models help in the complete development of a system, right from the conceptual stage to the customer delivery stage. http://upload.wikimedia.org/wikipedia/en/8/84/SDLC.jpg Prototyping The purpose of a prototype is to allow users of the software to evaluate proposals for the design of the eventual product by actually trying them out, rather than having to interpret and evaluate the design based on descriptions. In such a scenario where there is an absence of detailed information regarding the input to the system, the processing needs and the output requirements, the prototyping model may be employed. ...read more.

***
Whilst this has some very detailed description of systems analysis methods it appears to have been collected from some very high level books or sources without explanation or evaluation.