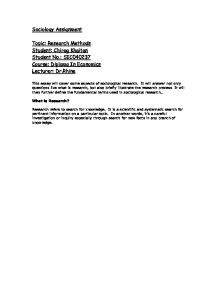 This essay will cover some aspects of sociological research. It will answer not only questions like what is research, but also briefly illustrate the research process

Sociology Assignment Topic: Research Methods Student: Chirag Khaitan Student No.: SIC040237 Course: Diploma In Economics Lecturer: Dr.Rhine This essay will cover some aspects of sociological research. It will answer not only questions like what is research, but also briefly illustrate the research process It will then further define the fundamental terms used in sociological research.. What is Research? Research refers to search for knowledge. It is a scientific and systematic search for pertinent information on a particular topic. In another words, it's a careful investigation or inquiry especially through search for new facts in any branch of knowledge. The Research Process Research is regarded as a cyclical process that generally involves the stages shown in the diagram on the following page. Stage 1: Define the research problem Select a topic for the research. For example, increase in number of crimes in a particular society. Stage 2: Reviewing the literature After defining the research problem, the next important stage is reviewing the literature. It means to look for previous works done by other researchers or as Patrick McNeill quotes in his book Research Method 1985: Every researcher, of whatever status, should spend time reading what other people have written about the area in which they are interested (pg 20). As every action has a purpose behind it, reviewing the literature is no less. ...read more.

(p. 103). This means that any method that is used needs to give the similar results each time it was used. Thomas and Nelson define validity (1996) as the:- "Degree to which a test or instrument measures what it purports to measure; can be categorized as logical, content, criterion, and construct." (p.214) Official statistics hold a very high degree of reliability in the sense that they are genuine records of what has happened in the past. For example, a researcher may use official statistics, recorded decades ago, in his research which may mislead him/her in this situation. It is because the researcher looking at those data may have asked different questions, which the data he/she used was not really intended to answer. Therefore, it can be said that the research has a low degree of validity. Validity here refers to the degree to which the data collected is a true picture of what is being studied. In another words, it can also be understood as, is the data gathered really the evidence of what it claims to be evidence of. ? Concept and Indicator Sociological research is based on objective and empirical data. One of the ways in which sociologists try to be more systematic and objective in collecting data is to be precise as possible by using clearly defined and explained concepts. ...read more.

Whereas secondary data is information generated by somebody else but used by a researcher in support of his/her work. Examples of primary data are - participant observation, surveys, interviews, questionnaires, direct observation and life histories and so on. Examples of secondary data are - official statistics, government documents, personal documents (e.g. diaries), police, medical and other government records, historical documents; research data collected by other scientists, newspapers can also be a source but are highly subjective and bias. Advantages and disadvantages Secondary data provides useful background information, which the researcher can read up on before starting his/her own research. Reliable secondary research can save time and money. Secondary sources are a cheap and readily available source of information. Furthermore, it also helps in longitudinal studies. Longitudinal refers to the analyzing of data over time. Adding to the advantages, a researcher can access all the literature and can cover all parts of the world by reading published books and internet articles. But the disadvantages are that the information may not be reliable and could be bias. It is impossible to double check their accuracy, problems of validity can crop up as the data collected could be for a different set of reasons. Steve Taylor describes the difficulties of using secondary data in his article 'Measuring Child Abuse'. He points that the police records carry a certain degree of inaccuracy in the figures because of under-reporting (not all cases are reported to the police) and non-recording. ...read more.