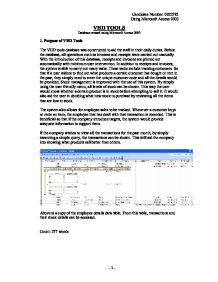 VHD tools. The VHD tools database was constructed to aid the staff in their daily duties. Before the database, all operations such as invoices and receipts were carried out manually. With the introduction of this database, receipts and invoices are printe

VHD TOOLS Database created using Microsoft Access 2003 1. Purpose of VHD Tools The VHD tools database was constructed to aid the staff in their daily duties. Before the database, all operations such as invoices and receipts were carried out manually. With the introduction of this database, receipts and invoices are printed out automatically with minimum user intervention. In addition to receipts and invoices, the system is able to carry out many tasks. These tasks include tracking customers. So that if a user wishes to find out what products a certain customer has bought or rent in the past, they simply need to enter the unique customer code and all the details would be provided. Stock management is improved with the use of this system. By simply using the user friendly menu, all levels of stock can be shown. This way the user would know whether a certain product is in stock before attempting to sell it. It would also aid the user in deciding what new stock to purchase by reviewing all the items that are low in stock. The system also allows for employee sales to be tracked. Whenever a customer buys or rents an item, the employee that has dealt with that transaction is recorded. This is beneficial so that if the company introduce targets, the system would provide adequate information to support them. If the company wishes to view all the transactions for the past month, by simply executing a simple query, the transactions can be shown. ...read more.

Availability has been removed from the vehicles table. This was initially a value that determined whether the vehicle was available, but it soon became apparent, that availability is not an attribute, and it is a query. Count: 352 words 6. Difficulties encountered As explained earlier in changes made to part 1, most of the difficulties I encountered were when it came to creating the tables in Access. I noticed that the existing tables were not fully in 3NF form and would therefore lead to an inconsistency in the database. There would be a repetition of data and this is not good for an efficient database since data could be entered twice wrongly. The other main difficulty I had in this project was creating the queries. Unfortunately once I had changed the tables to how I saw fit, they still did not seem right. This only became apparent when I was creating queries. As a result, tables had to be created, fields had to be moved. Because of this, the creation of queries took a long time. This had a knock-on effect on the reports that were created, because of the confusion of the tables. Count: 152 words 7. Queries and Reports This system has more queries than reports. There are a total of eight queries and four reports. The check rent stock query displays all the stock that is available at the present time. ...read more.

The group itself functioned very well, there were people who had different levels of experience using access within the group, from those who had done Access for A-level to those with no experience at all. The group accommodated this, and in our first two meetings there was an emphasis to educate those who did not understand various parts of Access. At the same time those with less proficiency with Access provided some really useful insights as they were able to stand back and take a look at the system as a whole. Within the group there were 3 people, including my self, who had already used Access before. This in itself created debate, and also I think that this created the problems of the first E-R diagram. However, having this level of experience within the group was educational, it challenged my way of doing things and at the same time I was able to learn new things about database construction too. I think I played a key part within the group itself. Although it created problems at times, it was good to have 3 people who had used Access before, and because communication was open within the group it was easy to exchange ideas and thoughts. I was able to generate many ideas and insights, especially because I have seen many company databases, so I knew what type of tables and entities were needed for the project. Count: 515 words ?? ?? ?? ?? Candidate Number: 0322782 Using Microsoft Access 2003 - 1 - ...read more.