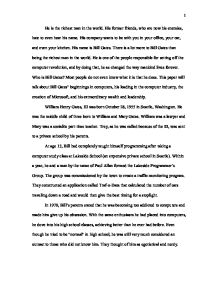 Who is Bill Gates?

He is the richest man in the world. His former friends, who are now his enemies, hate to even hear his name. His company wants to be with you in your office, your car, and even your kitchen. His name is Bill Gates. There is a lot more to Bill Gates than being the richest man in the world. He is one of the people responsible for setting off the computer revolution, and by doing that, he as changed the way mankind lives forever. Who is Bill Gates? Most people do not even know what it is that he does. This paper will talk about Bill Gates" beginnings in computers, his leading in the computer industry, the creation of Microsoft, and his extraordinary wealth and leadership. William Henry Gates, III was born October 28, 1955 in Seattle, Washington. He was the middle child of three born to William and Mary Gates. William was a lawyer and Mary was a socialite part-time teacher. Trey, as he was called because of the III, was sent to a private school by his parents. At age 13, Bill had completely taught himself programming after taking a computer study class at Lakeside School (an expensive private school in Seattle). ...read more.

Later in the life of Microsoft, Bill Gates developed a new Graphical User Interface for a disk operating system. He called it Windows. The first two versions earned him a small amount of money, but the major jackpot came from the later versions, such as Windows 3.1, Windows 95, and now Windows XP. This new graphical style was often imitated but none so far have had the staying power Windows has. Not only has Bill Gates changed the computer market for individuals, but with Windows NT (a version of Windows geared for networking in the business environment), he has focused in on the business world as well. As of April 30, 2005, Bill Gates is worth one hundred five billion dollars. This underestimates Bill Gates" wealth because it only counts his holdings of Microsoft stock as of 1995 (it is assumed if he has sold stock since then he has invested it in assets that perform about as well as Microsoft). The cars, houses, helicopters, aircraft carriers, islands, and small European countries that he bought before 1995 are not included. Bill Gates is the richest man in the world, and looking at his house, it shows. There was almost five hundred thousand feet of lumber used for his house, all of it being five hundred year-old Douglas Fir, sanded to a satin finish. ...read more.

come a long way to this blue lawn and his dream must have seemed so close he could hardly fail to grasp it", perhaps because he found it fitting to his own life. The heart of the house is the technology. There are miles of communication cables, which are for computer servers. Upon entering the house, residents and guests wear an electronic pin programmed with things such as favorite music, art, and television shows. Located in various rooms are wall displays that scan the pin and begin playing the person"s favorite music, television show, or displays their favorite art on video screens in the room. The pin also controls the climate of the room and only allows the phone nearest the person to ring. Bill Gates is not any ordinary person. He is a dreamer that wants to succeed. He will not put up with anything other than perfection. At the start of the computer revolution, he was told that his vision of a computer for the home was only whimsical. Bill Gates worked hard to reach the top, and prove everyone wrong. Moritz, Charles. William Gates Current Biography. H.W. Wilson Company: New York, NY, 1991. Pp. 237-241. Http://webho.com/WealthClock Http://www.microsoft.com Http://www.teamgates.com Http://www.geocities.com/BourbonStreet/4211/bill-faq.com Isaacson, Walter. In Search of the Real Bill Gates. Time Magazine, January 13, 1997. Pp. 46-47. 1 ...read more.