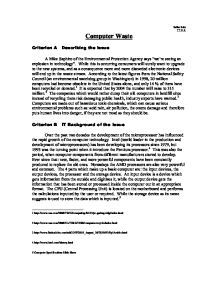 Salim Sakr I.T.G.S. Computer Waste Criterion A Describing the Issue A Mike Saphiro of the Environmental Protection Agency says "we're seeing an explosion in technology". While this is occurring consumers will surely want to upgrade to the new systems, and as a consequence more and more discarded electronic devices will end up in the waste stream. According to the latest figures from the National Safety Council (an environmental watchdog group in Washington) in 1998, 20 million computers had become obsolete in the United States alone, and only 14 % of them have been recycled or donated.1 It is expected that by 2004 the number will raise to 315 million.2 The companies which would rather dump their old computers in landfill sites instead of recycling them risk damaging public health, industry experts have warned.3 Computers are made out of hazardous toxic chemicals, which can cause serious environmental problems such as: acid rain, air pollution, the ozone damage and therefore puts human lives into danger, if they are not tread as they should be. Criterion B IT Background of the Issue Over the past two decades the development of the microprocessor has influenced the rapid growth of the computer technology. ...read more.

The technological development has also develop with a tremendous speed which obliged the consumer to upgrade to newer products in order to be at the same pace with the rate of development. 114 million PCs were sold in 2000, and 133 million were sol last year.7 And they will all need a final resting place in a few years. They will either end up recycled or they will become a hazard to our society. A government-sponsored survey found out the babies which were born near landfill sites were slightly more likely to be born with health defects. The truth is that only 25% of computer waste is recycled. Jon Godfrey which works in the technology recycling domain explains: "People don't associate the technology with hazardous waste but if you slash a computer up and stash it underground sooner or later the toxins will leech out" 8 The computers which end up at landfill sites cause many social and environmental problems. Air pollution is one of the most important ones. PVS for example is a widely used plastic for the casings which causes during both production and incineration the release of dioxins, which are among the most toxic chemicals ever known, as a result this also causes acid rain over a couple of decades. ...read more.

a certain percent of their profit which would cover the sum needed in order to recycle the computer and the state should take care of it. However governments are afraid to adopt this law because the computer manufacturers could leave the country where that law is in power and instead of bringing a benefit, it will bring loss. Another solution to this problem might be to stop using hazardous chemicals in the production of computer components, and make environmentally friendly computers. This has been adopted by certain monitor producers, and proved to be successful even though, the cost had been risen at the beginning in order to pay for the research that had been made in that field. This solution will only bring problems at the begging, because the process of making certain computer components will need to be changed. However this is probably the best solution for the future, because it will minimize the problems that can appear from the other solutions Criterion E Selecting and Using Sources 1. Computer Specifications Slide Show 2. http://www.cnn.com/2000/TECH/computing/04/12/pc.garbage.idg/index.html 3. http://www.cnn.com/2000/NATURE/12/08/computer.recycle/index.html 4. http://www.findarticles.com/m0COW/2001_August_30/78356935/p1/article.htm 5. http://www.intel.com/history.html 6. http://www.salon.com/tech/feature/2000/0918/toxic_pc/ 1 http://www.cnn.com/2000/TECH/computing/04/12/pc.garbage.idg/index.html 2 http://www.cnn.com/2000/NATURE/12/08/computer.recycle/index.html 3 http://www.findarticles.com/m0COW/2001_August_30/78356935/p1/article.html 4 http://www.intel.com/history.html 5 Computer Specifications Slide Show 6 http://www.salon.com/tech/feature/2000/0918/toxic_pc/ 7 http://www.cnn.com/2000/TECH/computing/04/12/pc.garbage.idg/index.html 8 http://www.findarticles.com/m0COW/2001_August_30/78356935/p1/article.html 9 http://www.salon.com/tech/feature/2000/0918/toxic_pc/ 10 http://www.salon.com/tech/feature/2000/0918/toxic_pc/ ...read more.