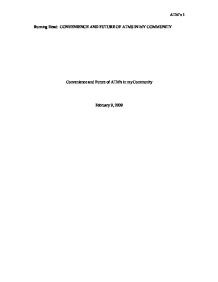 Convenience and Future of ATM's in my Community

Running Head: CONVENIENCE AND FUTURE OF ATMS IN MY COMMUNITY Convenience and Future of ATM's in my Community February 9, 2009 Automatic Teller Machines (ATM) have made our life easy and convenient in many ways. With more and more ATMs being installed from street corners to local retails, from outside the bank to shopping malls, they are hard to miss. Gone are they days when we need to stand in line inside banks waiting to be served by tellers? Transaction now processed with just the click of a few buttons. History and Development Luther George Simjian, in 1939, had the first idea to place an ATM in banks (Bellis, n.d.). He was to place them in holes so that bank clients can make their transaction through the window. This was first tested in New York's First National City Bank now Citicorp but was later rejected due to the lack of demand of customers (Bellis, n.d.). The first truly cash-dispensing machine was created by John Shepherd-Barron from De La Rue Instruments called De La Rue Automatic Cash System, or DACS (International Merchant Services, n.d.). They were checks bought in advance from tellers and was impregnated with Carbon 14 in order for the machines to detect them (Bellis, n.d.). It was installed and placed in Barclays bank in London (International Merchant Services, n.d.). In 1969, the first magnetic card was introduced. ...read more.

ATMs provided human resources with more time to process request that ATMs cannot process, thus, it increased the efficiency of tellers providing better services to their clients increasing the income of banks. Further, customers are now looking for banks with more access to ATMs for their convenience and accessibility. Second, ATMs can perform many of the tasks than tellers do and in the long run they are easier to maintain and cost considerably less than their human counterparts (Islam, et. al., n.d.). Installing ATMs reduces the work load of tellers. The increase in number of clients for a bank means that they would need more resources to cater to their customers. ATM machines are more efficient for they need no training and less maintenance (Islam, et. al., n.d.). Banks realize this cost effective way of providing service and provided more and more machines for their clients (Ferrari, Verboven, Degryse, 2007). Last, ATM machines serve as factors for marketing decisions for financial institutions (Islam, et. al., n.d.). Banks would first place ATMs in potential locations for establishing bank branches. They would first see if there are enough clients for them in the area before finally establishing a bank in the area. ATMs today can also provide cash advances from credit cards depending on the allowable limit of the card. Another convenience provided for the users is the added feature of ATM cards. ...read more.

Citizens of Scottsbluff are also most likely to spend a portion of their money in the Newsagents, chip shop, hairdressers and the two public houses. These places have ATM machines located near them. However, there are some disadvantages. Some ATMs have surcharges if you are using a machine from a different bank other than yours. People using these machines 2-3 times per week, can have surcharges that may have a sizable amount. But this is still very minimal compared to the benefits that these machines provide us. Another disadvantage of ATMs in some areas of the community is those that are located inside shops that close early. These machines would have limited access to potential users and are only available only during store hours. Finally, news of scams connected to ATM machines are becoming more common where in criminals can have access to your personal account by using a machine attached to ATMs that records your personal information as well as your account number and pin code. Conclusion The disadvantage of ATMs outweighs the advantages that it gives to its users as well as the banks that provide them. ATMs have come a long way from its beginnings. Today, it is no longer just used for simple cash dispersing but also includes a wide variety of uses including payment of bill, ATM debiting and cash advances from credit cards. Without these machines, banks would have not been as efficient as they are today and people would have not ripped the benefits of this technology. ...read more.