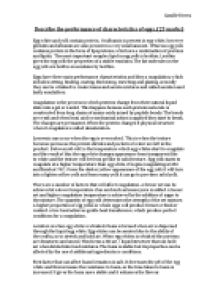 Describe the performance of characteristics of eggs.

﻿Camille Rivera Describe the performance of characteristics of eggs. (25 marks) Egg white and yolk contain protein. Ovalbumin is present in egg white, however globulin and albumin are also present in a very small amount. Whereas egg yolk contains protein in the form of lipoproteins, which are a combination of proteins and lipids. The most important complex lipid in egg yolk is lecithin. Lecithin gives the egg yolk the properties of a stable emulsion. The fat molecules in the egg yolk are held in an emulsion by lecithin. Eggs have three main performance characteristics and they a coagulation, which includes setting, binding, coating, thickening, enriching and glazing, secondly they can be whisked to create foams and aerate mixtures and called aeration and lastly emulsifiers. Coagulation is the process in which proteins change from their natural liquid state into a gel or a solid. ...read more.

There are a number of factors that will affect coagulation. A firmer set can be achieved at a lower temperature if an acid such as lemon juice is added. A looser set and higher coagulation temperature is achieved by the addition of sugar to the mixture. The quantity of egg yolk determines the strength of the set mixture. A higher proportion of egg yolks or whole eggs will produce firmer or thicker custard. A low heat achieves gentle heat transference, which produce perfect conditions for a coagulation. Aeration is when egg white is whisked. Foam is formed when air is dispersed through the liquid egg white. Egg whites can be aerated due to the ability of the ovalbu, in to stretch and hold air. When egg whites is whisked the proteins are denatures and uncoil. This forms a 3D air / liquid structure that can hold air when folded into food mixtures. ...read more.

Because the fat in the egg yolk, it inhibits the aeration recipes are usually for egg whites. However sponge cakes do use whole eggs. They are whisked with sugar over a pan of hot water (double boiler method) it works because the whisking action causes the proteins to denature and the heat causes coagulate resulting in stable form. Emulsion is formed when one liquid is dispersed in the small droplets into a second liquid with which it will not normally mix. Egg yolk has emulsification properties, which means it has the ability to hold large quantities of fat in an emulsion. Lecithin is present in egg yolk, which has a hydrophobic (water hating) component and hydrophilic (water loving) component. Eggs have many other functions. An egg can give additional thickness to sauces; it can also be use as binding and coating agent. Eggs can also be used as an egg washed or sometimes called glazing and commonly used for the top of pastries and breads. It also add colour and enrichment. ...read more.