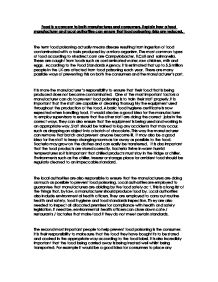 Food is a concern to both manufactures and consumers. Explain how a food manufacturer and local authorities can ensure that food poisoning risks are reduced.

Food is a concern to both manufactures and consumers. Explain how a food manufacturer and local authorities can ensure that food poisoning risks are reduced. The term food poisoning actually means disease resulting from ingestion of food contaminated with a toxin produced by a micro organism. The most common types of food according to nhsdirect.com are Campylobacter, E.Coli and salmonella. These are caught from foods such as contaminated water, raw chicken, milk and eggs. According to the Food Standards Agency, it is estimated that up to 5.5 million people in the UK are affected from food poisoning each year. There are many possible ways of preventing this on both the consumers and the manufacturer's part. It is more the manufacturer's responsibility to ensure that their food that is being produced does not become contaminated. ...read more.

They can also ensure that the equipment is being used and working in an appropriate way. Staff should be trained to log any accidents that may occur, such as dropping an object into a batch of chocolate. This way the manufacturer can remove that batch and prevent anyone become ill. It may also be a good idea for the staff to keep changing rooms as far away as possible to the food. Bacteria may grow on the clothes and can easily be transferred. It is also important that the food products are stored correctly. Bacteria thrive in warm humid temperatures so it is important that chilled products must stay in the fridge or chiller. Environments such as the chiller, freezer or storage place for ambient food should be regularly cleaned to an impeccable standard. ...read more.

If need be, environmental health officers can close down cafe / restaurants / factories that make food if they do not meet certain standards. The second most important people to help prevent food poisoning is the consumer. It is their responsibility to make sure that the food they have bought its to be stored and cooked in the appropriate way according to the food label. It is also incredibly important that the food being carried away is being treated well whilst being transported. For example it would be a good idea for consumers to place any chilled food into a "cool box" whilst being transported. Also different food groups should be separated. In conclusion there are many stages at which food poisoning can be prevented. As long as people do their part, and precautions are taken to help maintain and healthy non-contaminated food, no one should become ill through the process. ...read more.