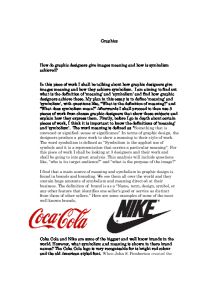 How do graphic designers give images meaning and how is symbolism achieved?

Graphics How do graphic designers give images meaning and how is symbolism achieved? In this piece of work I shall be talking about how graphic designers give images meaning and how they achieve symbolism. I am aiming to find out what is the definition of 'meaning' and 'symbolism' and find how graphic designers achieve these. My plan in this essay is to define 'meaning' and 'symbolism', with questions like, "What is the definition of meaning?" and "What does symbolism mean?" Afterwards I shall proceed to then use 3 pieces of work from chosen graphic designers that show these subjects and explain how they express them. Firstly, before I go in depth about certain pieces of work, I think it is important to know the definitions of 'meaning' and 'symbolism'. The word meaning is defined as "Something that is conveyed or signified; sense or significance" In terms of graphic design, the designers produce a piece work to show a meaning to their style of work. The word symbolism is defined as "Symbolism is the applied use of symbols and it is a representation that carries a particular meaning". ...read more.

Robinson, suggested the name Coca-Cola, thinking that 'the two Cs would look well in advertising'. He wanted to create a unique logo to go with it, and experimented writing the company's name in elaborate Spencerian script, a form of penmanship characteristic of the time. The Coke logo has not changed much since it was founded in 1886, this has lead me to believe that it is the most recognisable logo because of that factor of it not being changed since it started. The font gives the meaning of being a prestigious company or can show the date at which it was founded because at around that time, the style of font was common. The use of the colour red makes the logo stand out, however in some accounts, the logo is sometime found in white font with a red background. Nike is also another big brand and logo, but is not as old as Coca Cola. Its logo is rather basic, however the "swoosh" is very recognisable and famous around the world. ...read more.

He now produces pieces of art based on his graffiti culture. He is very famous in the graffiti/art world, making pieces for celebrities and produce work that is very sort after. To the right is an example of his work. This was designed for Mr Kanye West and his album cover for 808s & Heartbreaks. Kaw's style is very much cartoon orientated, with a lot of contrasting and bright colours involved. I believe that kaws is trying to send across a sense of meaning that shows everyone, not matter how old, can still love cartoons and involve cartoons in their lives, without having to be a child. The way how Kanye West is a very serious music producer yet at the same time, he involves this type of artwork in his album. I also find that Kaws has been able to show his meaning so successfully by the use of colours. The bright colour makes his design stand out and also adds differentiation. I believe it makes the viewer think and wonder, what is the meaning behind all these random shapes and bright colours. Overall i find that Kaws is showing his love for cartoons and maybe even trying to show his childhood within his designs. ...read more.