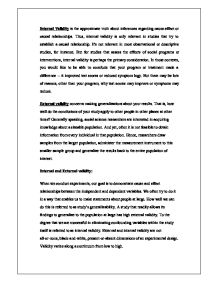 Internal Validity is the approximate truth about inferences regarding cause-effect or causal relationships. Thus, internal validity is only relevant in studies that try to establish a causal relationship. It's not relevant in most observational or descriptive studies, for instance. But for studies that assess the effects of social programs or interventions, internal validity is perhaps the primary consideration. In those contexts, you would like to be able to conclude that your program or treatment made a difference -- it improved test scores or reduced symptom logy. But there may be lots of reasons, other than your program, why test scores may improve or symptoms may reduce. External validity concerns making generalizations about your results. That is, how well do the conclusions of your study apply to other people in other places at other times? ...read more.

To the degree that we are successful in eliminating confounding variables within the study itself is referred to as internal validity. External and internal validity are not all-or-none, black-and-white, present-or-absent dimensions of an experimental design. Validity varies along a continuum from low to high. One major source of confounding arises from non-random patterns in the membership of participants in the study, or within groups in the study. This can affect internal and external validity in a variety of ways, none of which are necessarily predictable. It is often only after doing a great deal of work that we discover that some glitch in our procedures or some oversight has rendered our results uninterruptible. Pre-experimental: In general, a research design is like a blueprint for the research. ...read more.

Because of this, we can have considerable confidence that any differences between treatment group and control group are due to the treatment. Another true experimental design is the Solomon Four-Group Design which is more sophisticated in that four different comparison groups are used. The major advantage of the Solomon design is that it can tell us whether changes in the dependent variable are due to some interaction effect between the pretest and the treatment. For example, let's say we wanted to assess the effect on attitude about police officers (the dependent variable) after receiving positive information about a group of police officers' community service work (the independent variable). During the pretest, the groups are asked questions regarding their attitudes toward police officers. Next, they are exposed to the experimental treatment: newspaper articles reporting on civic deeds and rescue efforts of members of the police department. MGT333 Assignment 4 TO Miss Sue By Peter 19th. Feb. 2004 ...read more.