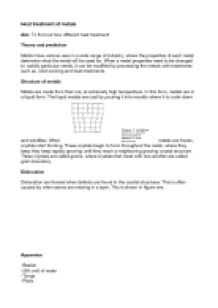 Investigating the effects of heat treatment on metals.

﻿Heat treatment of metals Aim: To find out how different heat treatment Theory and prediction Metals have various uses in a wide range of industry, where the properties of each metal determine what the metal will be used for. When a metal properties need to be changed to satisfy particular needs, it can be modified by processing the metals with treatments such as cold working and heat treatments. Structure of metals Metals are made from their ore, at extremely high temperature. In this form, metals are in a liquid form. The liquid metals are cast by pouring it into moulds where it is cools down and solidifies. When metals are frozen, crystals start forming. These crystals begin to form throughout the metal, where they keep they keep rapidly growing until they reach a neighboring growing crystal structure. These crystals are called grains, where crystals that meet with one another are called grain boundary. Dislocation Dislocation are formed when defects are found in the crystal structures. This is often caused by when atoms are missing in a layer, This is shown in figure one. ...read more.

The shorter end of the metal strip should then be put in between two wooden blocks(the marker line should still be visible). The wooden blocks should be clamped firmly on the table or bench to keep the two blocks in place. With leather gloves, bend the metal strip through 90 degrees where the strip is lying alongside the wooden block ( shown in picture B). The metal should be bending where the marker was made. Now the metal should be bent 180 degrees from its position, this is shown in picture C. This in total counts as two bends. This should be repeated, where each bend is being recorded, until the metal strip finally breaks into two. Risk assessment Risks Hazards Procedures Fire Moderate to severe burns which can result in injury Use Tongs to help keep a safe distance from the fire. For individuals with long hair, this must be tied back to avoid hair being burned. Hot metals Burns can result Tongs should be used to handle hot metals. ...read more.

This indicates that tempering may be the best heat treatment due to it making copper bend on average 84 times and aluminum 64 times, which are the highest average for both metals. The strength of steel on the other hand decreased under tempering. Generally, aluminum showed the most changes on all three treatment, with tempering having the most effect. Copper strength also increased under all heat treatment, with it also showing the most significant change under tempering. Steel however, was either unaffected or decreased under all heat treatments, this may due to experimental errors Evaluation The procedure for each metal on the table above was repeated three times, to ensure that the experiment was reliable. New strips of metals were used for each new treatment to ensure that the accuracy of the results is not changed. In addition, the length was each metal was made the same, to make the results valid. The metals also needs to be bent as close to the strip as possible, as bending the strips to far may cause the metal to bend quicker, affecting the accuracy of the results. ________________ ...read more.