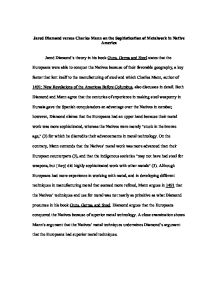 Jared Diamond versus Charles Mann on the Sophistication of Metalwork in Native America Jared Diamond's theory in his book Guns, Germs and Steel states that the Europeans were able to conquer the Natives because of their favorable geography, a key factor that lent itself to the manufacturing of steel and which Charles Mann, author of 1491: New Revelations of the Americas Before Columbus, also discusses in detail. Both Diamond and Mann agree that the centuries of experience in making steel weaponry in Eurasia gave the Spanish conquistadors an advantage over the Natives in combat; however, Diamond claims that the Europeans had an upper hand because their metal work was more sophisticated, whereas the Natives were merely "stuck in the bronze age," (3) for which he discredits their advancements in metal technology. On the contrary, Mann contends that the Natives' metal work was more advanced than their European counterparts (3), and that the indigenous societies "may not have had steel for weapons, but [they] did highly sophisticated work with other metals" (3). Although Europeans had more experience in working with metal, and in developing different techniques in manufacturing metal that seemed more refined, Mann argues in 1491 that the Natives' techniques and use for metal was not nearly as primitive as what Diamond presumes in his book Guns, Germs, and Steel. ...read more.

There are many different qualities needed in a sword that the Europeans had to consider: "First of all, the metal had to be hard enough to take a sharp edge, and that requires steel that is iron infused with carbon, and the more carbon one puts into the iron, then the harder the metal will be. But if it is too hard, then it will be brittle, and that would not work because when someone would hit someone else with his sword, then the sword would break" (3). The Europeans also had to consider pliability as a factor, because an ability to bend and spring back into shape was important in combat (3). Diamond argued that it took centuries of experimentation for the Spanish to perfect the techniques needed to make the deadly rapier, and he concluded that the "budding metal mongers"(Diamond 97) had nowhere near the experience necessary to build these kind of weapons. In contrast to Diamond's ideas about the use of metal, Mann argues that the Natives were far ahead of the Europeans when it came to working with the metal; and given the right resources, the Natives could have easily beaten the Europeans in combat. ...read more.

In summary, Diamond and Mann agree that the weaponry in Eurasia allowed the conquistadors to conquer the Inca; however, they are strongly divided in identifying which culture is more advanced as far as metal working techniques, in addition to the culture's main influences and uses of metallurgy. Mann believes that the Natives' metalwork manifests a high degree of sophistication, and that the European efforts to come up with different techniques were not nearly as advanced. Diamond believes that the European techniques were more advanced, and he attributes this to the centuries of experience from the Fertile Crescent. Mann and Diamond both present convincing arguments, and it is difficult to determine who is more convincing, since both have valid points. The issue comes down to whether the Natives or the Europeans were more advanced in metalwork. Judging by both arguments, Mann's case is more convincing because he provides great support by directly comparing the ways that each culture manipulated metal, which showed that the Natives had more advanced and sophisticated techniques. Literature Cited (1) www.pbs.org/gunsgermssteel/show/transcript2.html (2) www.threemonkeysonline.com/threemon_article_ancient_americans_charles_ mann_interview.htm (3) www.boston.com/news/globe/ideas/articles/2005/09/04/Native_ingenuity/?page=full (4) http://www.pbs.org/gunsgermssteel/show/episode2.html (5) 1491: New Revelations of the Americas Before Columbus by: Charles C. Mann (6) Germs, Guns, and Steel by: Jared Diamond ...read more.