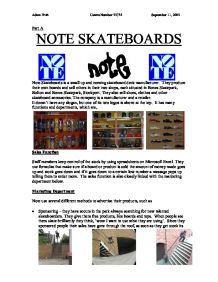 Note Skateboards is a small up and coming skateboard deck manufacturer.

Part A NOTE SKATEBOARDS Note Skateboards is a small up and coming skateboard deck manufacturer. They produce their own boards and sell others in their two shops, each situated in Bones Skatepark, Bolton and Bones Skatepark, Stockport. They also sell shoes, clothes and other skateboard accessories. The company is a manufacturer and a retailer. It doesn't have any slogan, but one of its two logos is above at the top. It has many functions and departments, which are, Sales Function Staff members keep control of the stock by using spreadsheets on Microsoft Excel. They use formulas that make sure if a board or product is sold the amount of money made goes up and stock goes down and if it goes down to a certain low number a message pops up telling them to order more. The sales function is also closely linked with the marketing department below. Marketing Department Note use several different methods to advertise their products, such as * Sponsoring - they have scouts in the park always searching for new talented skateboarders. ...read more.

Recently the note researchers have come up with a new, cheaper method of making smooth sliding boards. Concave. Making a board slightly concave means less surface area on an object. This method is much better than the other two; it's just as smooth as super slide and new wave have been known to crack down the ridges. Designs are sent by Note to New Deal via Email. Designs are made on Pro Desktop by parametric technology corp. The introduction of this software is a great advantage to the company, because the 3d design allows new deal (manufacturer) to build a more accurate model. New wave Conclusion I.C.T plays a big part in Note, purchases can be made faster, boards made better, money records more reliable and so on. Emailing invoices and purchase orders allows Note to give a more efficient company, the 'what if' function benefits customer needs and pro desktop means boards can be made exact to the last ridge on the wood. No people lost their jobs due to computers in the company so overall I believe I.C.T has benefited Note and allowed it to be a more reliable, efficient business. ?? ?? ?? ?? Adam Frith Centre Number 33735 September 11, 2003 ...read more.